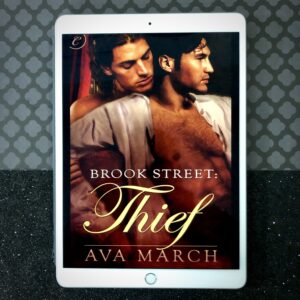 Benjamin can’t bear the thought of another London season without experiencing firsthand the affection he’s always craved, but never had the opportunity to explore. So, he goes to a gambling den known for its male clientele who prefer the company of other gentlemen.

Benjamin plays a few rounds of cards and is joined by the devilishly handsome Cavin. They casually flirt and eventually end their evening in a hotel room. It’s better than anything Benjamin ever could have dreamt of.

The next day, Cavin notices that, as he left Benjamin in the dim light of morning, he accidently mistook Benjamin’s waistcoat for his own. He must return it, so he goes to Benjamin’s townhome on Brook St. Needless to say, he is very happy to see Cavin. They’re unable to keep their hands off each other and have sex in the study, laying on a rug in front of a roaring fire.

Benjamin would like to get to know Cavin better, spend more time with him, but Cavin begs off. He senses that he is keeping something from him.

Cavin is a professional thief who works for Hale (his boss – ala Fagin in Oliver). While burgling a home that is an awful lot like Benjamin’s, Cavin has an unusual bout of integrity and begins to rethink his current profession. This moral about-face is all thanks to his feelings for one irresistibly appealing Lord.

Days later, Benjamin returns to the gambling establishment in hopes of running into Cavin again. No such luck.

Meanwhile, Cavin has taken young Sam under his wing. When it becomes clear that Sam is going to be pimped out to one of Hale’s associates, Cavin brings Sam to Benjamin in hope that he can help find him a suitable job. He does one better and offers Sam a position as part of his household staff. While Sam is getting settled, he asks Cavin to stay for dinner and attempts to tease some information from him during the meal, but Cavin is expectedly tight lipped. Eager to use those lips for other things, they retire to Benjamin’s bedroom. In the morning Cavin is gone.

After a fortnight without hearing from him, Sam brings Benjamin word that Cavin’s been brought in for pickpocketing. Benjamin finally begins to understand that it is a combination of Cavin’s pride and his unsavory past that has kept them, so far, from having a life together. He rushes to the station, bribes the constable, and brings Cavin home.

After they’ve made love, Cavin sneaks downstairs and finds Sam in the kitchen. While preparing a midnight snack, Sam asks why, since Cavin and Benjamin are ‘together’, won’t he stay? He insists it is not that simple. Benjamin joins them and tells him that it is, in fact, that simple. He doesn’t care if Cavin is a former thief, all he cares about is now… and their future together. They can have everything they’ve ever wanted, if only he’ll let himself have it.

Cavin agrees to a position as part of the staff (for appearances sake) and is happy to have found a man that he loves and place that he can finally call home.

If there is one author who knows how to bring the historical heat, it’s Ava March. Her stories are passionate, sexy, and emotional – three of the key things that make Benjamin and Cavin’s story so enjoyable. From the night Cavin tenderly guides Benjamin through his very first time, to all the other crazy hot moments that they pounce on each other, the one thing these two characters definitely don’t lack is chemistry.

I really liked Sam too, a street urchin with a heart of gold, in the classic Dickensian style.

Cavin is a big brother to him, striving to make sure he has better opportunities than Cavin did. And the way that it works out in the end, with everyone together, a wonderful found family, happy at last… well who can resist an HEA like that?

Charlie Belmont narrated the audiobook. You know I love a good British accent, especially when it comes to sexy historicals, they end up sounding even sexier. Kudos to him for a doing a terrific job with these memorable characters.

Brook Street Thief (which is part of a trilogy btw) is an older title (2012) that I think deserves attention from current readers of the genre. What’s the old saying? If you haven’t read it yet, then it’s new to you.