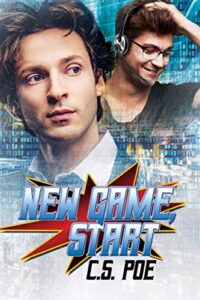 Edgar is a medieval scholar and translator who likes to relax by watching Walter’s gaming livestreams. Walter is an online superstar who’s kind and gracious to all his fans, he’s also ridiculously cute as well. When he announces that he’ll be the special guest at an upcoming convention in New York, Edgar can’t believe that he’ll have the chance to see his celebrity crush in person. He leaves a mildly flirtatious comment on Walter’s tweet. To his surprise, Walter flirts back, leading to a one-on-one gaming session that just might be Edgar’s best date ever and they chat online in the week leading up to the event.

Walter arrives in town the night before the con and Edgar goes to a bar where Walter is having a fan meet-up. The place is packed – it’s definitely not the right time to take out his laptop and show Walter the gay dating sim he’s been working on as a special surprise for his… well, is it too soon to call him boyfriend?

When Walter finally catches sight of Edgar in the crowded bar, he gives him a very eager kiss. It seems they have great chemistry both online and in the real world. They head back Walter’s hotel where they enthusiastically tumble into bed for a very sexy night together.

In the morning, Edgar is able to download the dating sim for Walter to play before he realizes he’s missed a deadline for one of his clients. A quick trip back to his apartment so he can send the file turns into a prolonged ordeal, leaving Walter to wake to an empty bed. He heads to the convention alone, worried that he may have said or done something wrong.

Nothing could be further from the truth. Edgar finally arrives at the sold-out convention and descends into the ninth circle of hell that is the Javits Center in NYC.

He can’t find Walter anywhere, but gets a notification on his phone that he’s starting a livestream. Edgar watches as Walter enthusiastically opens the file for the game he made him.

Edgar finally finds Water in a corner playing the dating sim, and they rush into each other’s arms, their kiss broadcast for the entire world to see. The internet’s favorite gaymer definitely has a brand-new boyfriend.

This sweet and sexy short from C.S. Poe is full of charm and cute, nerd-boy awkwardness. Edgar and Walter have delightful chemistry and I loved all their geeky conversations, especially their meet-cute dialog in the first chapter. I have a soft spot for nice guy characters and this adorable instalove story gave me all the schmoopy feels.