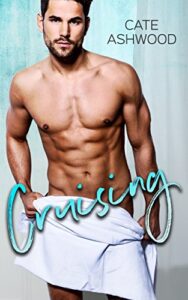 When his best friend wins a radio contest, Dylan agrees to go with Jake on an Alaskan cruise. Their stateroom is lovely, but there is only one bed. How are they going to share such cramped quarters when Dylan has secretly been in love with his friend since the day they first met?

There never was a radio contest, it’s all part of Jake’s plan to get Dylan to agree to a romantic cruise so that Jake can finally tell him how he really feels.

On their first night at sea, a few too many drinks, a karaoke love song, and a kiss in an elevator, transforms their relationship from friends to lovers in a single night of glorious sex.

Being with Jake is better than he ever could’ve dreamed, but that doesn’t stop Dylan from worrying that they’ve somehow wrecked their friendship. Dylan manages to avoid him for most of the morning (it’s a big ship), but Jake eventually confronts him. Why the angst? After all, what’s better than being in love with your best friend?

The fact is, there is nothing better, and they celebrate their new relationship status with another tumble in the sheets.

Cruising is a sexy/sweet short that perfectly demonstrates how charming the classic friends-to-lovers trope can be when it features two characters as kind as Dylan and Jake. They may have been too timid to reveal their true feelings at first, but once they were real with one another, the truth of their chemistry/attraction was too strong to deny.