Quick Review: Object of His Desire by Ava March 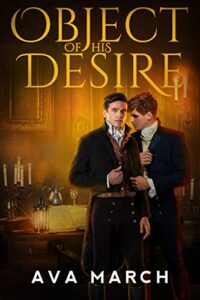 Object of His Desire by Ava March

His lordship unexpectedly pulls Henry aside and, over drinks, they discuss why Henry is his only guest who did not partake of the pleasures on offer. Arsen admires the steadfastness of his heart, whoever it may belong to.

Their conversation is interrupted when word of an unruly guest is brought to Lord Somerville’s attention. Henry helps take care of the drunkard, but some wine is spilled in the kerfuffle. They go to Arsen’s bedchamber where he changes his shirt and lets his appreciation of Henry’s large frame be known. Their kisses and caresses soon turn desperate as Somerville takes charge of their desire, giving Henry every pleasure he’s ever wanted.

During the night, Arsen ties up Henry for a bit of fun, but it sends the big man into a panic. His last lover had restrained him and was abusive. Arsen has no intention of ever hurting Henry and they spend the rest of the night demonstration the depth of their passion and trust.

In the morning, a reckoning comes. Henry is in love, but he won’t settle for scraps. It’s all or nothing. Arsen will gladly give his all to be with Henry, explaining that he’s done with life in London and is retiring to his country estate. Hopefully, with Henry by his side.

Slowly and tenderly, Henry proves just how willing he is to give everything to his new lover… today, and for all the days that lay ahead.

Object of his Desire is available in both ebook and audiobook formats. 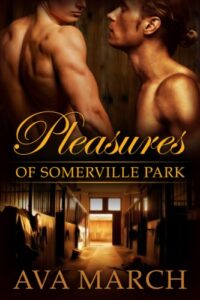 Henry and Arsen’s story continues in the sexy short, Pleasures of Somerville Park.

Arsen is frustrated that his youngest brother has been sent from London to spend several days at Somerville Park going over ledgers and dealing with the family’s large estate. He’s most frustrated by the fact that, with a guest in the house, he and Henry must be discreet about their relationship.

One evening, after dinner, Arsen finds Henry in the stables, forlorn that Arsen must return to London with his brother. He assures him he’ll never do such a thing and that he is steadfastly committed to Henry. To prove his devotion, he bends over a saddle stand and begs his beloved to do what he knows how to do so well.

Taking place a few months after Object of his Desire, it’s should come as no surprise that Arsen and Henry still can’t keep their hands off each other and are still very much in love. If ever there were a couple who could assure that the halls of Somerville Park are filled with happiness, it’s these two.