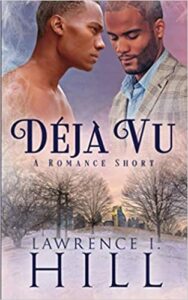 Déjà Vu by Lawrence I. Hill

Alvin is the hospitality director at an upscale Atlanta hotel. One afternoon while chatting/gossiping with friends Denise and Devon, he learns that their latest celebrity check-in is R&B superstar Tee Mills. As a kid, Alvin knew Tee as Tim, and they were best friends up until high school when Alvin got dropped for a more popular group of friends.

After receiving a special request from the penthouse suite, Alvin reluctantly goes up to find Tee preparing for some interviews and wearing nothing but a pair of briefs that show off everything he’s got to offer. Not that Alvin is interested. Especially not when Tim doesn’t even acknowledge him or their past together.

That night, Alvin is busy putting out fires (quit literally) at a large wedding reception being held in the hotel ballroom. The good-looking brother of the bride is chatting him up when the DJ starts spinning the Tee Mills classic, Déjà Vu. Hearing the song throws Alvin emotionally off center. He’s about to head home for the night when he gets another request from the frustratingly hot VIP upstairs.

Tim answers the door in nothing but a robe, and Alvin is frustrated by his obvious seduction techniques. Tim asks if the desert he brought up is one of Alvin’s own recipes, because he really like the food at Alvin’s restaurant.

In the years since they’d last seen each other, Alvin had gone to culinary school, opened his own place, and when that didn’t work out, he got the job at the hotel. It seems his old friend has been keeping tabs on him.

They get to talking over chocolate cake and champagne, Tim trying to explain how being on the down-low was never what he wanted, but it was his way of having both a career and a life. He always admired how Alvin was out in school and was jealous of how easy it seemed for him (it wasn’t) and how much Tim liked him back then.

They reminisce about a long-ago snow day when they danced to their favorite song and shared their first kiss. Tim shows him the ring that he wears on a gold chain around his neck, a ring that Alvin made in shop class and gave to him. He’s kept it because he’s been in love with Alvin all this time. He couldn’t tell him how he felt back then because he was too scared. He’s stronger now and has come back to Atlanta over the holidays to show Alvin how he really feels – how he’s always felt.

Everything Alvin has ever wanted is standing right in front of him. It’s a second chance and it’s one he’s not going to pass up.

After sleeping together, they cuddle up close and Tim whispers that he wrote Déjà Vu about Alvin. It was just for him.

In the morning, Alvin leaves the comfort of the suite to start his day, when his phone starts blowing up. In a telling tweet, Tee Mills has come out to the world. Dating and loving someone as famous as Tim is sure to have its challenges, but deep-down Alvin feels this is the start of something good – their future is filled with nothing but possibilities.

Déjà Vu is a story that’ll definitely have you rooting for the two heroes. When they’re finally able to openly talk about their past and realize that the future they want is together… well, that’s what swoony, feel-good romance is all about.

I though the characterization in this novella was particularly strong, and I especially liked the dialogue. The way Tim and Alvin talk with each other has a wonderful flow, a very natural rhythm. It’s so good that I think this story would make an amazing one act play. I would love to see Tim and Alvin’s story brought to life on stage.

If ‘second chances’ and ‘romance with a superstar’ are some of your favorite tropes, then I suggest you give this story a read.

Déjà Vu is available in both ebook and paperback formats.