Quick Review: One Good Lord Deserves Another by Eden Blake 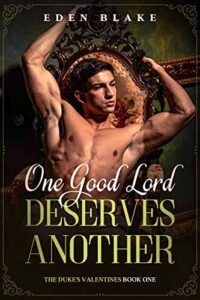 One Good Lord Deserves Another by Eden Blake

Edmund is tasked with turning the newly christened Lord Alec into a respectable gentleman. Keeping the devastatingly handsome and flirtatious Lord in check may be a bigger task than he first imagined.

Alec cannot believe that Edmund has found his way back into his life. Years earlier, when he was a child, Edmund payed him a kindness, one that Alec has never forgotten, and ever since that time he has been smitten with the older gentleman.

Their days are spent doing the things gentlemen do during the season – making calls, taking a promenade in the park. One afternoon, the two of them are sharing an eel pie from a street vendor (don’t get grossed out, it’s apparently really good) when Alec saves Edmund from a pint-sized pickpocket. The compassion Edmund shows the little street urchin, despite the attempted theft, makes Alec love him all the more.

At a ball Alec insists he only has eyes for Edmund but does his prescribed duty and dances with several eligible young ladies… and a few gentlemen, which raises Edmunds ire. Could he possibly be jealous?

Alec finds Edmunds possessiveness a turn on. They go outside to take some air. In a dark corner of the rose garden Alec is finally able to steal the kiss that he has wanted for so long. He explains their meeting from years ago and then whispers all the wicked ways he intends to explore his irresistible lover.

They both share the same intense attraction but falling for Alec is the last thing Edmund should be doing. Alec’s uncle is heavily invested in Alec finding a good match and producing an heir.

Both of their futures are at stake.

They carry on through the season, and Edmund goes to great lengths to show Alec there is only one responsible choice to be made. But He is having none of it and soon has his beloved naked in bed, proving he knows exactly what he wants, and that is Edmund. They start slowly, but Alec is soon worked into a frenzy. If this is truly the only moment that they’ll have, then he is going to take all that Edmund is willing to give.

Afterward, Alec comes up with a scheme. With the help of a friend who has a reputation as a rogue, Alec pretends to be “ruined” so that the only honorable way out of the scandal is to marry Edmund, who is penniless, but titled, nonetheless.

Okay, where do I begin with how much I LOVED this novella? One Good Lord Deserves Another was historical age-gap perfection. Alec’s passion for Edmund practically leapt off the page. And can we please talk about how amazing it was to see an older, thicker hero, coming into his own and finding his one true love? Alec, who is a traditionally irresistible handsome hero, simply cannot get enough of Edmunds roundness which is described as plump and sturdy. His bulk is heavy and full. At one point, Alec even describes his lover a “perfect armful”. It’s all very sweet, and very, very sexy. I’d love to see more husky heroes just like this.

I also liked how in Eden Blake’s historical world, Alec and Edmund were able to marry. The only objection wasn’t to the fact that they were two men, but to the question of an heir to Alec’s title. If the rest of the stories in Eden Blake’s world are this openly accepting, and unrelentingly sexy, then sign me up! I definitely want some more.