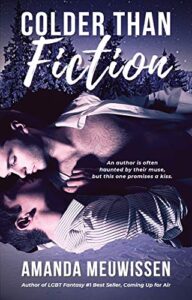 Colder Than Fiction by Amanda Meuwissen

Ezra is a man with a deadline. Add to that the stress of the holidays, plus the mother of all hangovers from a recent Christmas party, and needs an escape if he’d going to finish his latest manuscript on time. Some quiet time alone at the family cabin should be just the thing.

He awakens in the morning to find an extremely handsome stranger in his bed, one that bears an uncanny resemblance to Jon Havoc, the roguish thief who tempts the hero in his latest thriller.

Ezra doesn’t know if he’s lost his mind, but with Havoc as his sexy inspiration, he’s finally able to make headway on his book. Havoc inspires Ezra on the page and in the bedroom, his fictional creation encouraging him in ways no other man has.

With the book finally finished, Ezra’s editor praises the new direction his work has taken. While leaving the office, Ezra runs into a man whose bluer-than-blue eyes remind him of a certain flirtations anti-hero. Is it a matter of fiction made real, or is real life stranger than fiction?

If you like flirty banter, then Amanda Meuwissen has got you covered. The banter between our two heroes is sexy and fun. I particularly enjoyed how Havoc is able to seduce Ezra as well as Graham, his fictional love interest in the thriller Ezra is writing. Speaking of which, we get to read sections of the book as Ezra is writing them. The adventures of Havoc and Graham are pretty compelling, and I certainly wouldn’t mind reading more about their exploits in the future.

Colder Than Fiction is a terrific short that sexily plays with the line between reality and fantasy.