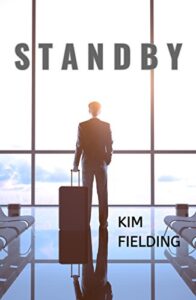 After an awful job interview, Tom has to fly back home to Iowa, only to have his flights grounded or delayed. He’s on standby for the first flight out in the morning, so it looks like he’s stuck, an uncomfortable airport chair his bed for the night.

In the deserted terminal, a handsome man strikes up a conversation with him. Rafael likes watching the planes. It reminds him of a time before he was grounded. The attraction between them is electric (literally) and Rafael Takes Tom to an out of the way storage room. He shows Tom the scars on his back, convincing Tom that Rafael is much more than he seems. After sex than can only be described as transcendent, Tom opens up about what he really wants – a simple life and someone special to share it with.

Tom awakens in the terminal. As he waits for his flight, he strikes up a conversation with a handsome guy. Rafael is headed to Iowa too, moving there for a new job. Things Tom are starting to look a whole lot brighter.

This short about Tom and his tryst with a uniquely appealing stranger is really charming. I especially enjoyed the banter between the two character (I’m a sucker for snappy dialog). I also liked the idea that even in an undeniably awful situation (airports, amirite?) a little bit of magic can be found.

Standby is a quick and engaging read that offers a little bit of heat and a lot of hope.