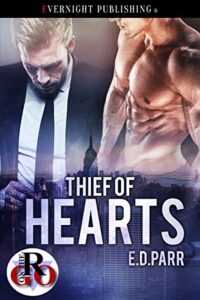 Thief of Hearts by E.D. Parr

Nice guy lawyer Blake fears he is no longer attractive because of a facial scar he received while protecting one of his clients. The window washer outside his office window sure likes what he sees. When Blake and Alex find themselves alone in an elevator, they press the stop button and have in a hot and hard quickie.

Alex is not a real window washer though. It’s a cover he’s using to case the upper floor, home to a jeweler dealing in rare gems. Alex’s life of larceny is really more of a hobby since he donates the objects he purloins to those in need. If he can have a little fun with Blake at the same time, where’s the harm in that?

A few days later, Alex puts on a sexy show for Blake outside his window. He invites Alex into his office, and they engage in a satisfying fuck in Blake’s private bathroom. They both want more and agree to see each other that later night.

Blake can’t help but wonder – why does Alex’s full name sound so familiar?

A meal and some conversation back at Blake’s house leads to more scorching hot sex. Alex spends the night. He could get used to this. He’s starting to fall for Blake, who just might be the right guy worth giving up his life of crime for.

Blake sees a magazine article that reveals real Alex’s identity. He is Alexander Ryan, the son of a famous classical pianist and a musician in his own right. Blake knew he’d heard that name before.

They’ve both fallen hard and fast. After making love that night, they plan their future together. Alex gives up his Robin Hood act, he has an amazing new man in his life to better occupy his time.