Quick Review: There Galapagos My Heart by Phillip William Stover 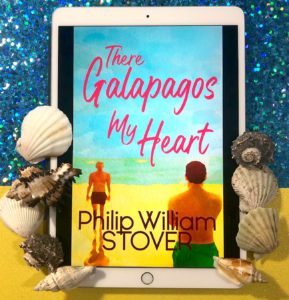 There Galapagos My Heart by Phillip William Stover

As a favor to his aunt Penny, Michael agrees to teach painting to the guests on her high-end cruise to the Galapagos Island. What could be the harm in a quick vacation before he moves into his new position as a senior acct. manager at his firm.

Off he flies to Ecuador and, before they set sail, Penny has the visiting faculty introduce themselves to the tourists. Their resident wildlife expert is going to be Benton… Michael’s insufferably handsome, charming, British ex-boyfriend.

He does everything he can to avoid Benton but, as they tour the capital and take photos where the Northern and Southern equators meet, they can no longer postpone the inevitable and talk. It doesn’t go well. Michael just can’t seem to catch a break. Penny tells them that they’ll be rooming together for the duration of the cruise.

They call a truce and, after the ship sets out to sea, Benton gives his first lecture about the various species that call the Galapagos home. In lesser hands, the presentation would be deadly dull, but the passengers are enthralled by him and Michael realizes that he may not be as over Benton as he once thought.

To avoid dealing with this new revelation, Michael races back to their stateroom and pretends to be asleep. Benton takes his time getting ready for bed, doing a tantalizing strip tease that Michael can’t help but watch through half-closed eyes.

He is so not over him.

After a little schedule manipulation from aunt Penny, Michael is to join Benton on an early morning onshore excursion to plan the upcoming nature walk for the guests. Their time alone amongst the wildlife is magical but things quickly take a sour turn when Benton suggest that Michael do a solo show of all the pieces he is sure to paint with the Galapagos as his inspiration.

He thinks he’s being supportive of Michaels’ talent. But Michael only feels the pressure to pursue something that he’s given up. Something he feels he’s failed at.

Back on the boat, there is a telegram waiting for Benton. Michael reads the awkwardly phrased congratulations. It seems Benton is now a father.

Despite the frustrations with his ex, Michael couldn’t help dreaming up romantic second chance scenarios with Benton. But he now has a child with somebody special waiting for him back in England. It was never meant to be with them.

Things are decidedly frosty between our heroes before Penny forces them to play nice for the remainder of the trip. At dinner they reminisce about the old days and Benton opens up about his emotionally distant family and why he cares about animals so much, forcing Michael to realize that he never really appreciated what a good thing he had with Benton.

The next morning Michael teaches his watercolor class. The passengers all seem to enjoy it. Benton as well. In fact, watching him teach so passionately about something he obviously loves has Benton feeling amorous. Once he returns from his onshore nature excursion, they’ll meet in their stateroom, where Benton will show Michael just how romantic he really feels.

Michael uses his downtime to catch up on some work and becomes so wrapped up in accounts and spreadsheets that forgets his scheduled rendezvous with his gorgeous ex. Penny decides it’s time for a heart-to-heart and explains that being chained to something because it represents (in Michael’s mind) security, might be keeping him from becoming his true self.

After teaching his final watercolor class, Michael goes ashore and finds an art gallery. After talking to the man whose art he admires, he realizes that security ain’t all it’s cracked up to be. It might be time to spread his wings and fly, just like the exotic birds Benton loves to talk about.

Michael quits his job and, after a brief but harrowing health scare, Benton and Michael realize that they’re far better together than they ever were apart.

FYI – Benton, we eventually find out, is the proud poppa of a baby wombat. He was part of the team taking care of the mother wombat in a zoo back in the UK.

I really, really enjoyed this super sweet, super tropey tropical romance. It was the perfect vacation that I didn’t know I needed.

One other thing I want to quickly mention is I think the character of Michael, in another author’s hands, could have come off as very annoying because he spends an awful lot of the story pushing people away or shoring up the walls that he’s built around his life. Benton and Penny are constantly pushing him to explore his art more and he’s constantly saying ‘no’ until he finally has this ‘a-ha’ moment at the end of the story.

The way that the author uses Michael’s introspection and especially his humor, makes him very likable and very relatable. You understand why he does, and thinks, the way that he does. Overall, I just really loved the story about Michael and Benton, fighting their way back from something  that didn’t work before – and most definitely works now.

If you haven’t guessed yet, I really enjoyed There Galapagos My Heart, and I highly recommend that, if you haven’t already, you give author Phillip William Stover a try. You won’t be sorry.