Quick Review: He’s Behind You by Clare London 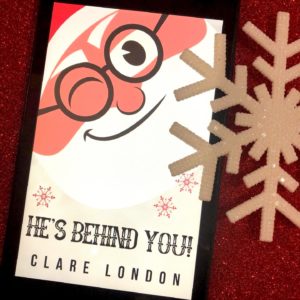 He’s Behind You! by Clare London

Frank, an actor of moderate success, has returned to his small Devon village only be cajoled by his mother to help out with this year’s Christmas panto. As the auditions later prove, there’s literally nothing more eccentric than the inhabitants of a charming English village. Frank is flabbergasted by the oddly eclectic range of ‘talent’ on display from the local townsfolk and he certainly wasn’t expecting to see dreamboat Duncan, the one that got away, or in this instance, the one Frank pushed away.

A year earlier, Frank landed a gig on a soap and Duncan got a job on an oil rig, so Frank ended things before they could even really begin. Faced with Duncan again, Frank can’t help but feel that old spark and wonder if he made the right decision.

Rehearsals for the Cinderella themed show force the two to spend more time together, leading them to talk through their past and the situations that lead them back home. At the final dress rehearsal, it looks like Frank just might get his Christmas wish, but Duncan makes it clear that he’s not interested in a no-strings fling. Unless Frank is willing to make a serious attempt at a relationship, Duncan won’t risk getting hurt again, watching him walk away like before.

On performance night, a pair of kitschy Christmas gloves bring the two of them together (not unlike Cinderella and her glass slipper) and they decide that they just can’t fight that feeling anymore.

Everyone in town loves the show and at the after-party Frank and Duncan celebrate with more than just a kiss under the mistletoe, they take a quick tumble in a supply closet. Frank’s mom is quite pleased that her matchmaking has created a satisfyingly happy holiday for all involved.

I’ve always enjoyed Clare London’s uniquely British take on romance, especially when it comes to quirky side characters who populate the story of two nice guys finding their way back to love. He’s Behind You! is relatively short, but still manages to pack a sweet, romantic holiday punch that I really loved.

This review originally appeared on the Big Gay Fiction Porcast.