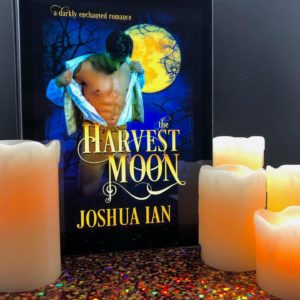 The Harvest Moon by Joshua Ian

The Harvest Moon by Joshua Ian is a historical romance with an intriguing touch of magic. The beginning of this novella opens with our hero Malcolm, who has stopped to rest in a small village. That night, outside the tavern, he meets a handsome and intruging young man, a weaver named Daniel. They make polite small talk, the conversation eventually going deeper.

Malcolm is drawn to him, convinced that his new acquittance shares his same “interests”.  Daniel invites him to his cottage in the forest. It might be 1834, but Malcolm recognizes a booty-call when the opportunity presents itself.

They make their way through the woods which are alive with a special kind of magic, the bright harvest moon showing the way. At the cottage, Daniel is a perfect host, they chat, share a drink… and a bed.

Malcolm has never experienced anything like what he feels when he’s with Daniel. He wakes in the middle of the night, but the bed is empty. There’s a menacing knife on the table, and Daniel is on the floor in front of the fire, seemingly in pain. He tells Malcolm to leave before his grandfather returns home.

Daniel seems angry, but remorseful, in need of care, but coldly antagonistic. Malcolm wants to help, but eventually agrees to leave.

The next morning, at the inn, Malcolm hears several locals talking of the elderly weaver in the woods. He mentions that he knows Daniel but is warned away with long told tales of evil and witchcraft.

Malcolm is worried and decides, before continuing on his journey, to go see Daniel and offer any help he can. When he arrives at the cottage, he finds the old man, who tells him that Daniel isn’t there and won’t ever be coming back. Malcolm pressed him further and realizes that the old man is Daniel.

He tells Malcolm the sad tale of how he, long ago, met and fell in love with a man named Thomas, a weaver and practitioner of magic. They were inseparable until villagers, whipped into a witch-hunting frenzy, killed Thomas – cursing Daniel to a life of endlessly searching for his long-ago love.

The night before, Malcolm was to be sacrificed to the harvest moon for another year of Daniel’s life. But, sharing the same strong feelings as Malcolm, Daniel couldn’t go through with it. Malcolm kisses Daniel, their love finally freeing him from the curse.

Malcolm takes Daniel back home to his ancestral estate where they can love and live happily ever after.

I really enjoyed this story from a new to me author. While the narrative is firmly rooted in the historical aspects of the story, the magical elements give it an intriguing fairy tale vibe – not in a cutesy Disney way, more of a sinister and sexy Grimms fairy tale way.

Something else that I found interesting was the use of language, which is very rich and evocative, but not dense and confusing like the literature of the time in which the story is set. The dialog especially has a certain ring of authenticity. It comes across as period appropriate without being burdened with “thee’s” and “thou arts”.

If you’re looking for something a little bit different, but still very romantic and satisfying from a genre perspective, I’d definitely say give Joshua Ian’s The Harvest Moon a try.