Quick Review: I’ve Got This by Louisa Masters 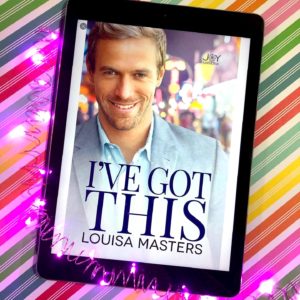 I’ve Got This by Louisa Masters

Derek Bryer is very good at what he does, and he loves his job as one of key managing directors of the sprawling theme park complex, Joy Universe. But he’s having one of the worst Mondays of his career. Not only does he have to deal with a grisly murder at one of his resort hotels, but half of the performers from the main theme park are down with a severe case of food poisoning.

Trav Jones, an actor/singer/dancer who is part of a touring production that is playing in one of the Joyville theaters, gets the call to come work in the theme park. Quadruple pay for a couple days work? Sure, why not?

What’s that about? Everybody loves Derek.

While putting out fires at Joy Universe, Derek can’t stop thinking about Trav, so he does some digging and finds out that Trav is the most famous Broadway performer that no one has ever heard of. Critics and audiences adore him, but he never plays a lead role and seems unwilling to take his career to the next level.

After a few days, things finally calm down and Derek takes the opportunity to go see Trav in his show. Derek is mesmerized by his performance and afterward goes backstage to congratulate the cast and chat up Trav.

Derek’s personal assistant, who probably know Derek better than he knows himself, mentions that Trav is volunteering at a local community theatre and needs some reliable transportation. Derek offers Trav his old car which he has yet to sell.

They go out to dinner and Derek learns that the reason Trav was so uncomfortable when they first met, was that he reminded Trav of the alpha male jocks who used to torment him in school. They talk and get to know one another during dinner, Derek showing Trav that there’s a real person beneath the golden boy persona he projects to the rest of the world.

There’s definite chemistry between them and a sizzling goodnight kiss proves to be an auspicious start to a whirlwind summer fling. Things get serious rather quickly and their relationship is soon tested when, through a strange set of circumstances, Trav is forced to go on in his show in the lead role.

Derek passes this boyfriend test with flying colors, instilling confidence in Trav, calming his anxiety, assuring him that he has more than enough talent to pull this off, and generally being awesome by supporting the man that he loves in every conceivable way.

The next test comes in the guise of the sociopath who murdered her husband at Joy Universe, spinning a wildly improbable conspiracy theory to shift blame and get her off the hook by disparaging the theme park, Derek specifically.

It’s a PR nightmare and Derek is at the center of the storm. Trav is furious that Derek seems intent on handling it all himself, unwilling to share the burden. Derek eventually comes to realize that there are, in fact, many people in his life who genuinely care about him, including Trav and the entire team at Joy Universe.

Some shrewd legal moves from Joy Universe and Derek’s expert handling of the challenging situation repairs the momentary damage to the park’s reputation and cements Derek’s position within the company. Which leaves the situation with Trav.

With the current run of his show now over, it seems like the only option for Trav is to return to work in New York City. But with a bold, audacious new plan from the team at Joy Universe, there might just be a way for both Derek and Trav to stay together and achieve their perfect fairytale happily-ever-after.

To put it simply, I think everything about this book is perfectly swoon-worthy. I loved Derek and Trav. Their chemistry and heat was sweet and genuine.

Not only were the characters wonderful, but I thought Louisa Masters really brought this story to life with the unique worlds that our heroes were a part of – careers in the theatre world and theme park hospitality/entertainment.  So much fun, so interesting.

It’s clear that the author thought things through in regard to the fictional world of Joy Universe, and the glimpses that we get behind the scenes were intriguing and fun, but it’s not bogged down in detail. No worldbuilding overkill. No info-dumps.

Derek and his assistant often do a lot of ‘walk and talk’ scenes like on TV’s The West Wing. It’s a fun, active way to get across a lot of information without the characters having to sit and spout a lot of exposition.

I’ve Got This is a terrific sweet romance, with to-die-for heroes in a wonderfully unique setting.

This review originally appeared as part of episode 207 of the Big Gay Fiction Podcast.