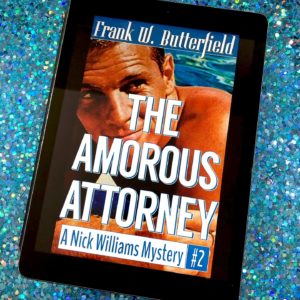 The Amorous Attorney picks up just a few days after the events in The Unexpected Heiress, the first book in the Nick Williams mystery series.

Eager to get his new business venture off the ground, Nick needs the services of his lawyer friend Jeffrey Klein, who’s gone missing, presumably too busy canoodling with Taylor Wells, his movie star boyfriend.

At the request of the foulmouthed fixer at MGM, Nick and friends head to LA and quickly find Jeffrey shacked up with his beau at the Beverly Hills Hotel. Jeffery wants to run away with the handsome hunk, but Nick makes sure he understands what a truly terrible idea that is. Heartbroken, Jeffrey returns to San Francisco with Nick and Taylor goes back to work.

One day later the news hits the gossip columns that Taylor is engaged to co-star, an up-and-coming Hollywood ingénue. Taylor promptly goes missing again. So Nick, his boyfriend Carter, and a whole passel of their friends and collogues head south of the border to Ensenada where they find Taylor and Jeffrey at a hotel on the Mexican riviera.

Jeffrey is ready to chuck everything for the man he loves, but after a few days, he comes to realize that he and Taylor might not have what it takes to make it in the long run.

That evening, in a very Agatha Christie turn of events, everyone gathers together, including Taylor’s fiancé Rhonda, who has her girlfriend in tow. Dinner doesn’t go as expected. Jeffrey gets sloshed and drunkenly muses about what might have been if things hadn’t ended with Nick, who is harassed by Don Maldonado, a local corrupt politico who is convinced that millionaire Nick wants to buy the hotel.

The next morning, Nick and Carter are awakened by a gunshot. They find Taylor dead and Jeffrey is nowhere to be found. The handsome and flirtatious Captain Esparza takes statements from the hotel guests, but it’s clear that he has his eye set on both Nick and Carter, inviting them to his home later that evening.

They arrive at the soiree and are shocked to find what must be every gay man within a fifty-mile radius in attendance. The odd evening ends without any clues as to who killed Taylor.

Esparza questions Nick and later sequesters him, along with Carter and the rest of their friends, on a yacht. They’re busy enjoying their detainment when the plot involving Esparza, Moldanado, and others comes to light. It’s all a scheme to gain local political power. Nick uses his quick wits to diffuse the situation, but it also helps that Carter is an excellent shot.

Jeffery is found and cleared of all wrongdoing, while Taylor’s killer faces karmic justice.

Our heroes return to the city by the bay, ready to face the next chapter in their lives.

Author Frank W. Butterfield does a wonderful job with this, the second book in the Nick Williams series. It builds on the previous installment, telling us more about the lives of the characters that we’re getting to know (and love), while showing us the bond that’s beginning to form between the large cast of intriguing characters.

We get to know Nick and Carter even more this time around, and its impossible not to root for this pair of mystery solving lovebirds. They’re seriously nuts about one another and I like the little movements between them that show how two men, in a committed relationship in the 1950’s, continue to grow and evolve together.

It’s also cute how, in this installment in the series, they’re ‘trying out’ calling one another husband, which is pretty progressive considering the time in which they’re living… there might’ve even been a ring involved in one of the quieter moments of The Amorous Attorney.

I’d like to quickly mention that I also enjoy the author notes that Butterfield includes at the end of each novel, explaining what is based on fact, or is fictional, and the research he did into the specific time and events depicted in each book.

I loved this installment in the adventures of Nick Williams and am looking forward to what he and his friends get up to in the future.

This review originally appeared as part of episode 207 of the Big Gay Fiction Podcast.