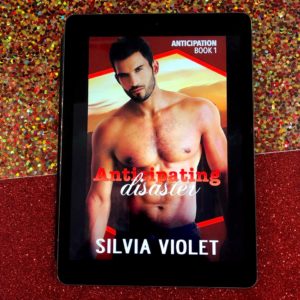 Nice-guy Oliver enjoys his quiet bookish life – so he’s less than thrilled to be attending a family reunion at a ski resort. He braves the frigid temperatures and disapproving attitudes of his extended family to please his grandmother, who he adores.

Irresistibly sexy bisexual outdoorsman David is in town to help his friend mend a broken heart. While his bestie distracts himself with a pair of slope bunnies, David sets his sights on klutzy Oliver, offering to give him private ski lessons.

Flirtation leads to friendship and to David accompanying Oliver to some of the planned reunion activities. When certain family members mock Oliver’s nerdish tendencies, David fiercely defends him. Can’t they see how smart and sweet and kind he is?

To give Oliver a vacation from his relatives, David takes Oliver to Anticipation, the picture-perfect mountain town that he calls home.

The more time that our heroes spend together, the more they think this might just be the real deal. The problem is that neither one of them does casual relationships. David has his life in Anticipation and Oliver has his life back in Florida with his grandmother.

Oliver returns to his real life and, after some time apart from David, he realizes (with some help from grandma) that his quiet existence might be more about hiding from life than truly living it.

He decides that David is well-worth the risk and heads back to Anticipation to start a new adventurous chapter in his life story.

I really enjoyed Anticipating Disaster. The author takes some familiar character types and story tropes and crafts a really compelling story, while at the same time giving the romance her own twist.

The set-up might be pure category romance, but let’s be real, this is a Silvia Violet book, so you know that the heat level is going to be cranked up to 11.

Also, in the bedroom, David has a talent for turning some particularly filthy turns-of phrase. So the time our that heroes spend together do not disappoint – these aren’t the kinds of sex scenes you’ll skim over!

This book is the first in a series with the quaint town of Anticipation serving as the backdrop for future installments. A few side characters are introduced in Anticipating Disaster and I look forward to the new romances that will unfold in upcoming books.

This review originally appeared as part of episode 193 of the Big Gay Fiction Podcast.