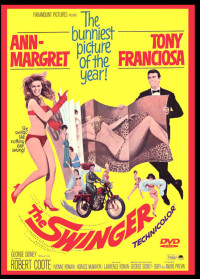 What self-respecting Ann-Margret movie would be complete without a title song sung by the fiery chanteuse herself? The Swinger (1966) certainly doesn’t disappoint. It has a doozy. Clad entirely in skin-tight black, Margret encourages everyone to “Come on and swing with me!”

Our narrator is Sir Hubert Charles (Robert Coote), British lecher and publisher of Girl Lure magazine. Inside the corporate offices of Girl Lure, Sir Hubert finds his daughter in the arms of editor/playboy Ric Colby (Tony Franciosa). While they proof an upcoming layout, Ric insists that, “Even for a girlie magazine there’s such a thing as good taste.” Too bad the same rule doesn’t apply to Ann-Margret movies.

Wholesome Kelly Olsson (played by Ann-Margret whose last name is, in fact, Olssen) is mistaken for a model, plucked from a bevy of beauties in the waiting room and quickly ushered into a photo studio. “I am not a nudie,” she insists, “I’m a writer.” But they’re not interested in her stories, just her body. After watching Sir Hubert chase his secretary around his desk, an idea comes to her. “Sex, flesh, hanky-panky… that’s what they want. I know how to get published.”

With an armload of pulp paperbacks as her guide, Kelly settles in front of her typewriter and begins to pump out prose that Girl Lure won’t be able to resist. Kelly lives in an L.A. mansion that’s home to a rollicking artists commune (where else would a young, naive mid-western writer live?). With her nose buried in her “research”, she dances from room to room as the camera lovingly follows every gyration of her curvaceous figure. As she shimmies and shakes, a gale force wind tosses her hair. Never mind that she’s indoors and there’s nary a fan in sight.

Kelly hands in her new story, but is once again rejected by the magazine. After sneaking into the men’s washroom, she demands to know why Ric won’t publish her article. He calls her a fraud, “Not a true moment in it.”

“The Swinger just happens to be my life story,” she fibs.

Sir Hubert is intrigued by the biographical possibilities “of a real live nymphet” and drags Ric to the commune to see just how depraved she really is. With the help of her beatnik pals, Kelly puts on a swinging show for the prying eyes of her prospective publishers. Wearing only a bikini and some body paint, Kelly creates a messy piece of modern art as she is rolled across an oversized canvas like a human paintbrush.

“I say, this looks positively degenerate.” Sir Hubert is suitably impressed when the vice squad breaks up the party. Ric then abducts Kelly with the intention of reforming her wicked ways.

On the drive to his aunt’s beach house, Kelly draws a parallel between their current situation and the story of “that Higgins cat, the stuffy john who made a lady out of a piece of garbage.” While musing on Pygmalion, Margret (whose character is supposedly from Minnesota) inexplicably adopts a Brooklyn accent.

Ric explains to his Aunt Cora (Nydia Westman) that if he can turn Kelly into a good girl, there won’t be anything tawdry for Sir Hubert to exploit. But Kelly doesn’t give up so easily and feigns drunkenness. Ric must wrangle her out of bed and into a cold shower. When the old letch and his snooty daughter arrive, they find them wrestling underneath the shower spray.

Kelly’s scheme seems to be going a little too well. At the offices of Girl Lure, she becomes the unwanted focus of Sir Hubert’s attention. With the touch of a button, his automated office transforms into a seductive James Bond-style den of inequity. “Sir Hubert likes a sure thing!” he shouts as he chases her around his desk.

Yes indeed, sexual harassment sure is funny! But Kelly outruns him. Despite his lascivious reputation, he admits that, “I’m the only non-scorer in the whole game.” She thoughtfully assures him that his secret is safe.

Before going on a shopping spree montage at Saks, Kelly comes clean to a surprisingly hip Aunt Cora. “I think the whole put on’s a gas!” she tells Kelly, “The only way to handle men is to keep them standing with one foot on the oil slick. Then, when they tumble, it’s in your direction. Dig?”

And tumble Ric does when Kelly fakes alcohol cravings later that evening. “It’s the monkey on my back!” she moans. After tucking her into bed, she launches into the hilariously impromptu song “I Wanna Be Loved”.

Never has alcoholism been so sexy as when Margret looks directly into the camera and croons in her breathily distinctive style. The wind machine is back, but this time it makes a little more sense since the patio door is open. Some carefully focused lighting draws attention to her scantily clad assets. Not that those assets needed any more attention.

Ric’s reaction to this seduction is to tire her out with a quick round calisthenics. “When I get tired,” she purrs, “I get stimulated, baby.” She finally manages to get him into bed for an all-night cuddle.

The next day, a private eye informs Ric that Kelly is indeed pure as the driven snow. He knows that she lied, but she doesn’t know that he knows she’s a fake. Got that? It’s at this point that the film tries to pass itself off as a comedic sex farce. The Swinger is quite funny, but for all the wrong reasons.

Ric plans to drive her to confession by photographing Kelly in embarrassing and scandalous recreations from her soon to be published sexposé, a plan that culminates in a turn on the burlesque stage. Covered from head to toe in ostrich feathers, Margret sings a rendition of “That Old Black Magic” as her costume is stripped away a la Gypsy Rose Lee. “You’ve been so wonderful about it all,” he tells her, “I’ve got a special treat in store for you.”

That “treat” turns out to be some hanky-panky at a local motel where Franciscus proves once and for all that he is completely incapable of playing comedy. He’s more creepy than comedic as he chases Margret around the room in rapid Benny Hill-style.

After all, everything is funnier when you speed it up.

Ric is carted away by the vice squad and Kelly escapes with her virtue intact. She arrives home to find her parents visiting from St. Paul. Director George Sidney tries to liven up the following exchange with lots of close-ups and quick cuts. “It’s just so terrible the things I’ve done,” Kelly confesses to her mother, “I was a card dealer in a gambling den and then a stripper and a street walker… then in that motel room a man tried to forcibly seduce me.”

Mom is nonplussed. “If you think these things are bad, wait till your children grow up.” When Kelly sees Ric on a live TV report, she hops on a motorbike and speeds off to police headquarters. Ric, meanwhile, steals a squad car and speeds off to be with Kelly.

Sir Hubert chimes in with some more narration. “Will they marry and live happily ever after? Or will they destroy themselves on America’s dangerous highways?” The answer turns out to be the latter. Ric and Kelly finally meet… in a head-on collision!

“Is that any way to end a tender, delicate love story?” Sir Huber asks.

Tender? Delicate? Exactly which movie has he been watching? The film literally rewinds itself and our lovers uncrash. The finale plays out again (this time without the highway fatalities) and our lovers rush into each other’s arms. With an ending like that, the only thing left is for Ann-Margret to reprise the film’s zany theme while sitting on a… you guessed it, a swing.

In conclusion: One of the reasons The Swinger is such an adorably awful piece of cinema trash is that it tries so very hard to be “hip” and fails at nearly every turn. During the 1960’s, Hollywood was woefully behind the times. The counter-culture youth movement left Hollywood filmmakers clueless as to what the American public wanted to see. Old guard director George Sidney (who worked with Ann-Margret on Bye, Bye Birdie, 1963 and Viva Las Vegas, 1964) seems at a total loss with the material in The Swinger.

With its crazy costumes, wacky musical interludes and faux bohemian concepts, The Swinger is a star vehicle that features everything a bad movie aficionado could ask for. When Ann-Margret is added to the mix, well, that’s when a movie like The Swinger truly becomes a slice of bad movie heaven. 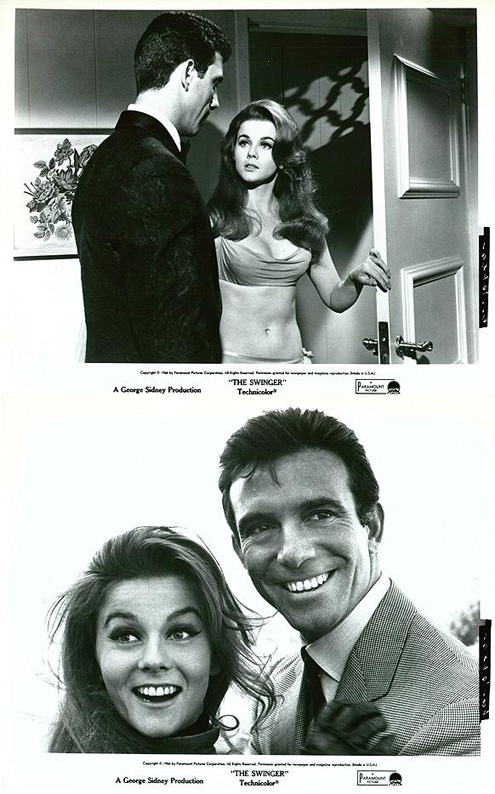