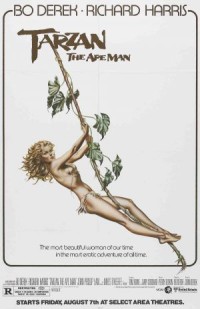 You know this isn’t your father’s Tarzan movie when the MGM logo appears on screen and the lion’s roar is replaced with a Johnny Weissmuller Tarzan yell.

What it’s all about: The adventure begins with a narrator (Wilfrid Hyde-White) relating the legend of Tarzan to his fellow club members, one of whom is presumably Edgar Rice Burroughs. This storytelling device might explain why Tarzan the Ape Man (1981) focuses on Jane’s point of view. After all, a bunch of dirty old men would much rather hear tales about a nubile blonde than the Lord of the Apes.

As Jane, Bo Derek is covered from head to toe in turn of the century finery. She hires a boat to take her to the camp of James Parker, an Allan Quartermain-type explorer who is also her long lost father. Before the credits are even over, Bo strips off her virginal white dress and goes for a swim in the river. Apparently she isn’t worried about crocodiles or piranha.

Upon arrival at camp, Jane is greeted by the expedition’s photographer played by the handsome, but wooden, John Phillip Law. Any under-emoting by Derek and Law is more than made up for by the hammy acting of Richard Harris. As Parker, Harris seems to think shouting at the top of his lungs equals a performance.

The family reunion at dinner doesn’t go very well. Bo resents Harris’s absenteeism. “Like a trophy, you posed with mother and child and then you were gone. Now doesn’t that make you a first-class bastard?” she asks.

Because she so closely resembles his dead wife, Parker takes more than a fatherly interest in Jane. “How much do you hate me?”

Parker’s ultimate goal is to find the legendary elephant’s graveyard. “Any expedition on this continent is no place for a woman.” Harris chauvinistically explains. Moments later, Bo and the rest of the crew are all packed up and set off on their journey.

After several days, they make camp at the base of a huge plateau. While sitting cozily in their tents they hear a familiar yodeling war cry. Harris explains that the creature making the noise is Tarzan, the great white ape. He then proceeds, at the top of his lungs, to give a dissertation on the excitement of the unknown. “Fear is intoxicating.” When another Tarzan yell scares off most of his native bearers, Harris screams, “Oh shut up you boring son of a bitch!”

In the morning, each expedition member scales the face of the plateau. Their climbing rope slowly rubs and frays against a jagged piece of rock until a native extra plunges to his death. “Why did you do that?! Why?!” Harris shouts at the heavens. What’s even funnier than his vociferous questioning of God is that the skies answer back with a rumble of thunder.

After traveling a little further, the expedition finds the great inland sea. Bo comes up with the bright idea of staying behind and taking a bath, assuring her father that she’ll catch up later. Left alone in the wilds of Africa, Bo strips down and frolics in the crystal blue waters. While rinsing off, she is stalked by a lion. She lingers in the surf while the jungle cat lays in wait on the shore.

Suddenly, with a rousing orchestral fanfare, our hero finally arrives. Lip syncing the classic Weissmuller Tarzan call, Miles O’Keeffe makes his grand entrance in a skimpy loin cloth. If Derek is a perfect 10, then O’Keeffe, with his long hair, perfect cheekbones, and ripped physique, is the male equivalent. An embodiment of the perfect male specimen.

Tarzan attempts to pull a resistant Jane from the surf, but the King of the Jungle and his feline friend are scared off by Parker and Holt who come to Jane’s rescue with guns blazing. With his daughter’s virtue in peril, Parker does what any father would do, “I’m going to have that ape son of a bitch’s head as my trophy.”

As they continue their trek through the jungle, they are watched by a bunch of surly tribal warriors. While filling her canteen by the river, Jane is taken away by Tarzan. She briefly escapes his brawny clutches but is soon engulfed in the suffocating squeeze of a python. Tarzan swings to the rescue, dives into the muddy river and wrestles with the snake. The scene is only two minutes long but feels a whole lot longer. The sequence is shown in slow motion, which might have been an effort to make the fight seem more dangerous and dramatic. All it really achieves is a kind of hilarious redundancy as we’re shown what looks like the same shots over and over.

Tarzan finally wins and collapses after the titanic struggle. Jane is conflicted. We know this because Bo chews on her fingernail, an unsubtle acting trick she uses several times throughout the film. Should she run away, or should she help the jungle man who saved her life? C.J. the orangutan, some chimps, and an elephant help bring Tarzan back to his home turf. While tending to the ailing Tarzan, curiosity gets the better of Jane. “I’ve never touched a man before.”

While Jane is busy playing doctor, her father and the remaining members of the expedition search the jungle for her. Tarzan eventually wakes up and retires to his leafy bachelor pad. Jane joins him when night falls. Director John Derek chose to shoot this scene “day for night”, which means the scene was shot in daylight and then darkened in post production. The process is seldom convincing and in this case looks particularly bad because Derek cuts between our lovebirds in their tree top getaway and a scene of the Parker expedition that was actually filmed at night.

When daylight comes, Bo’s virtue is still intact. “I’m still a virgin. Now I don’t know whether that’s good or bad. What are you?” she asks her jungle paramour while eating a banana. “You’d have to be, wouldn’t you? It’s a strange problem.”

Jane and Tarzan swim around in their idyllic jungle Eden and gaze longingly at each other. In other Tarzan movies this is where we’d get the obligatory “Me Tarzan, you Jane” scene and she would teach him to speak English. This time it seems that Tarzan will remain completely mute because that’s how Bo likes him. Big, dumb and good-looking. With Bo left to essentially act with just herself, we get some classic bad movie moments as Jane thinks aloud, “God, if the girls back home could see me now.” She then earnestly tells Tarzan that he’s, “more beautiful than any girl I know.”

Proving that even the most primitive man is unable to resist the siren’s call of Bo Derek’s breasts, Tarzan makes it to second base before he’s interrupted by Parker’s search party. The reunion is all too brief. The evil jungle tribesmen take Jane, Parker and Holt captive. They’re brought before the Ivory King, a hulking brute with a mohawk.

Bo is scrubbed down by slave girls and then covered from head to toe in white paint. To take her mind off the fact that she’s about to be raped by a Wrestlemania wannabe, Parker takes the opportunity to tell his daughter a story and begins to shout out the nursery rhyme Humpty Dumpty. The Ivory King thankfully shuts him up by impaling him with an ivory tusk.

With a mighty Tarzan yell, the King of the jungle leaps into action. Tarzan battles the Ivory King in…yup, you guessed it, slow motion. Once again director Derek attempts to stretch the tension (and the running time) in a rather pedestrian fight scene. In real time the scene would last about thirty seconds. After some regulation wrestling moves, Tarzan wins and pounds his chest in victory.

Harris is given a final chance to ham it up in a touching death scene. With Bo naked and covered in tribal make-up (complete with green lip gloss) Harris gets in the last word, “Well, they certainly did a paint job on you.” Jane kisses her father good bye before heading off with her favorite jungle hunk. As the end credits roll we’re shown just what Jane has given up civilization for… frolicking topless with C.J. the orangutan.

So, we have a sexy Tarzan movie without any sex. What does that leave us with you might ask? Well, it leaves us with plenty. There’s Richard Harris chewing the scenery as only a classically trained actor can. We also have Bo Derek, a classic beauty to be sure, but an actress who’s completely incapable of carrying the dramatic burden of an entire movie. Then there’s Miles O’Keeffe, a gorgeous hunk of man playing a title character that’s practically irrelevant in his own film.

The promotional tagline for Tarzan the Ape Man boasted that it was, “Unlike any other Tarzan you’ve ever seen!” 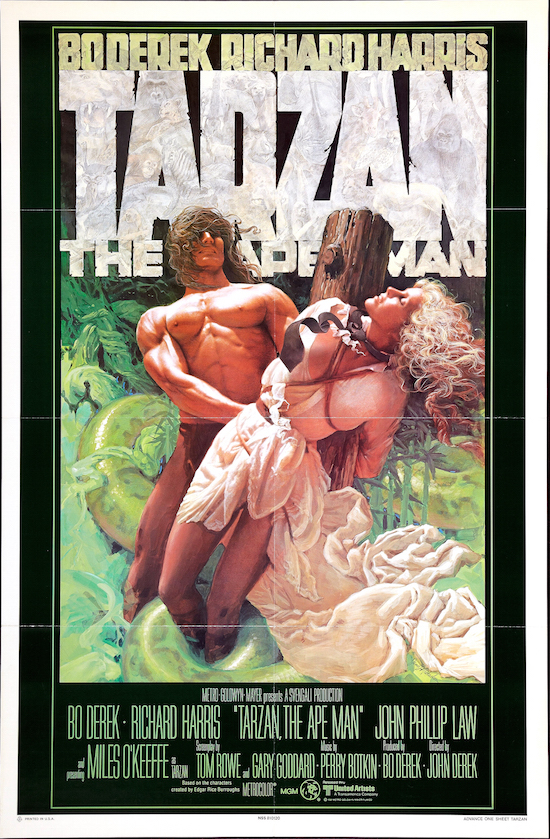 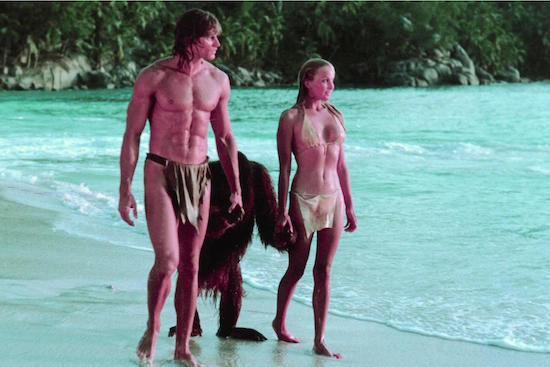 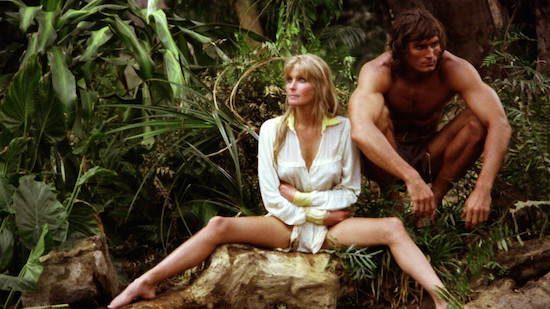