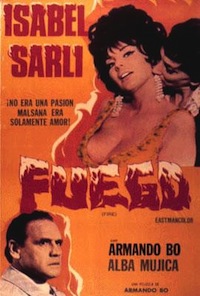 She burns. She consumes. She’s a woman on fire. She’s Fuego.

Though mostly unknown to audiences in the U.S., Isabel Sarli is a bona-fide sex goddess in Latin America. Director Armando Bo discovered the beautifuly buxom former Miss Argentina and quickly put Sarli to work in his colorfully melodramatic sexploitation films. Bo directed his favorite leading lady in such films as Carne (1968) and Put Up or Shut Up (1958).

What it’s all about: Fuego (1969) begins with the sexually insatiable Laura (Sarli) trying to cool her burning desires with a refreshing dip in a picturesque lake. Laura’s devoted lesbian housekeeper Andrea (Alba Mugica) helps her dry her remarkably feminine curves. Laura doesn’t seem to mind the impromptu massage from her amorous maid, but when a stud on a stallion rides up and witnesses their little tete a tete, Laura is suddenly overcome with modesty and puts on a robe.

Later at home, Laura tells her Andrea that, “At times, I love you so much, at others… I despise you!” The characters in Fuego are constantly making bold and melodramatic statements. It’s as if every thought they express were followed by several exclamation points, and if you happen to be watching the English subtitled version, they often are!

Laura admires her bountiful assets in a full-length mirror while dressing for a party. The passion Andrea feels for her employer is almost as strong as Laura’s lust for men. “You’re insatiable,” Andrea chastises, “Your longings are endless. You’re a mix of angel and demon.”

At the party, two women watch as Laura romances her current paramour. “In the end,” one of them quips, “She’ll really fall in love.”

“She still has ten to go at least. She’s shameless.”

True to form, as soon as the gent leaves, Laura sets her sights on the man who watched her by the lake that afternoon. Carlos (director Armando Bo) cannot resist her as she pouts and preens in her Liz Taylor wig and gargantuan false eyelashes. It takes only a few moments for him to become bewitched by this south of the border siren.

They leave the party together. In the garden outside, Carlos proclaims his love, “I think I’ve lived long enough to realize that you are the woman I’ve always been waiting for.” He kisses her. They proceed to make love in front of a chicken coop while the wacky theme song throbs away on the soundtrack. The love theme from Fuego (a sultry rumba played on a Wurlitzer) is deliriously kitschy and, aside from Sarli, the most memorable thing about the film.

While horseback riding in the mountains, Laura declares that, despite their snowy surroundings, “I feel my blood boiling.”

“You’re the most voluptuous of all women,” Carlos tells her. He proposes on the spot, but Laura honestly doesn’t know if she can be faithful. He promises to always stand by her and help defend her from herself.

To try and cool her seemingly insatiable longings, she rolls around in a snow bank. But the question remains, why should she be good when she’s so great at being bad? Even after a succession of other men, Carlos still wants to marry her. She finally relents.

Andrea is upset by the news, afraid that the occasional romps she shares with her mistress will end. “You’ll drive him crazy, he’ll end up killing you. You will not get married!” Andrea is brought to hysterical tears and passion quickly turns to violence as a catfight ensues.

Laura says her “I do’s” in a white wedding gown, and her nuptials are consummated in front of a crackling fire. Though Sarli and Bo were famous lovers off screen, their chemistry on screen is lukewarm at best. They go through all the motions, but their love scenes are remarkably unsexy thanks in no small part to Bo’s fumbling romantic moves. “Fuego!” a Spanish troubadour bleats on the soundtrack as the newlyweds later canoodle on the rocky shore of the lake where they first saw one another.

One day, after Carlos has left for work, Laura pleasures herself while still in bed. But caressing her own bountiful curves isn’t enough. She puts on gloves, go-go boots, a fur coat and heads into town where she proceeds to flash every man she comes across. Though most of the men think she’s muy loco, one finally submits and they drive up into the hills where Laura does a strip tease against a tree. She is a panting, writhing, desperate ball of passion aflame!

Once the stranger has had his way with her, he leaves her stranded. Laura sheds tears of shame as she begins her long walk home. When Carlos finds the house empty, he goes in search of his wife. When he finds her, Laura asks, “Do you forgive me my love?”

While Carlos spends his days working as an engineer, Laura amuses herself with various men. She sometimes even bids her devoted and maid to satisfy her urges… not that Andrea minds. One day, after an afternoon spent in the company of another man, Carlos demands to know where Laura has been. “I walked around aimlessly and thought about you,” she lies. When he presses her for the truth, she confesses, “I thought of killing myself. With you I learned to love. I’m afraid of losing you, I’d like for you to kill me. I feel a powerful need to die.” Laura’s inability to remain faithful weighs heavy on her conscious. “Life is all I have. I offer it to you, take it from me!” she pleads. Despite her unholy passions, he still loves her.

Laura still cannot get enough. One afternoon, Carlos returns home to find his wife in someone else’s arms. “I only came to fix the refrigerator!” the man insists. Once he has chased the stranger from his marriage bed, Carlos threatens his nymphomaniacal wife with a gun.

“I’m going to kill you! You’re a whore!” he cries in the best tradition of soap opera theatrics.

“Kill me… please!” she begs. Sarli really acts up a storm, emoting as if her life truly depended on it. “I love you, but I feel an internal fire devouring me, a sexual fury that kills me. I need men!”

Carlos finally seeks outside help. “Your wife is gravely ill,” a doctor tells him. The physician proceeds to give an amusingly earnest textbook lecture on the “pathological exaggeration of the libido”, the heartbreak that is nymphomania.

Laura agrees to a full examination. Even the purely professional touch of a gynecologist sets her passions ablaze. In a moment that must be seen to be believed, Laura pants and writhes while on the exam table. “Go on doctor,” she moans, “Keep doing that.”

Carlos fires Andrea. How can poor Laura ever expect to get better with a salivating sister of Sappho willing to cater to her every sexual whim? “You have taken advantage of a poor sick woman to satisfy your low instincts.” Andrea insists that her love for her mistress is pure, but leaves anyway, knowing that it’s in Laura’s best interest.

Carlos and Laura fly to the U.S. in search for a cure. Surely they can find an expert on sexual deviancy in New York City. A brief consultation with a physician offers little hope, “With God’s help, everything will be alright.” Gee, thanks doc.

Left to her own devices, Laura hooks up with a greaser in Times Square. Later, on the rooftop of her hotel, Laura contemplates ending it all. If she cannot remain faithful to the one man that she truly loves, then life just isn’t worth living. With the New York skyline beckoning her to jump, a marching band inexplicably blares on the soundtrack. Carlos keeps her from taking the final leap, but she firmly believes that her, “Illness can only be cured by disappearing forever.”

The film spirals towards it’s loony climax when the troubled couple return home and Laura continues with her slatternly ways. “Kill me! I beg you. I can’t live like this.”

“Yes Laura,” Carlos hilariously deadpans, “It’ll be for the best. For you and for me.” On a mountaintop, he holds a gun to her head, but cannot pull the trigger. “Don’t you see that I still love you? Cheat on me with everyone. I couldn’t live without you.”

After praying for guidance, Laura heads to a rocky hillside. In a flowing, diaphanous white gown, she holds her arms aloft and walks over the edge of a cliff.

While laying flowers at his wife’s grave, Carlos encounters a vision. In broad daylight, Laura’s ghostly apparition professes her undying love. “I’ll always be at your side, with my soul, my love.”

Unable to bear life without his beloved Laura, Carlos shoots himself, his lifeless body splayed over the grave of his wife. Their souls reunite and they walk away together hand in hand… lovers for all eternity.

In conclusion: Isabel Sarli and Armando Bo made an astonishing twenty-seven movies together. Many of these films featured variations on the sexual themes explored in Fuego. Bo favored stories about a sexy “good girl” who stirs the passions of the men around her or a sexy “bad girl” whose intense desires (nymphomania) always end in heartbreak. Bo is often referred to as the Argentinean Russ Meyer. Both Bo and Meyer were making similarly sexy and outrageous films around the same time, but where Meyer had a stable of curvaceous beauties to cast in his films, Isabel Sarli was Bo’s sole inspiration.

The colorfully sexy shenanigans of Sarli have been made available on DVD thanks to Something Weird Video. The film’s 1960’s color palate remains particularly vibrant, especially for a film of this rarity. The mono sound is also in good condition. Sadly, scratches and dirt on the print are evident throughout, though one imagines that it would be difficult to find a better or more complete version (Fuego was cut by censors in several countries) of this obscure classic. A second Sarli feature, The Female (aka Seventy Times Seven), is also included as part of the “sizzling Latin double feature”. The Female is a B&W arthouse western and one of the few films Sarli made without Bo. The disc includes several trailers for Fuego as well as other South American sexploitation titles. There are two short subjects as well, each featuring a pretty gal taking it off in a burlesque-style striptease. 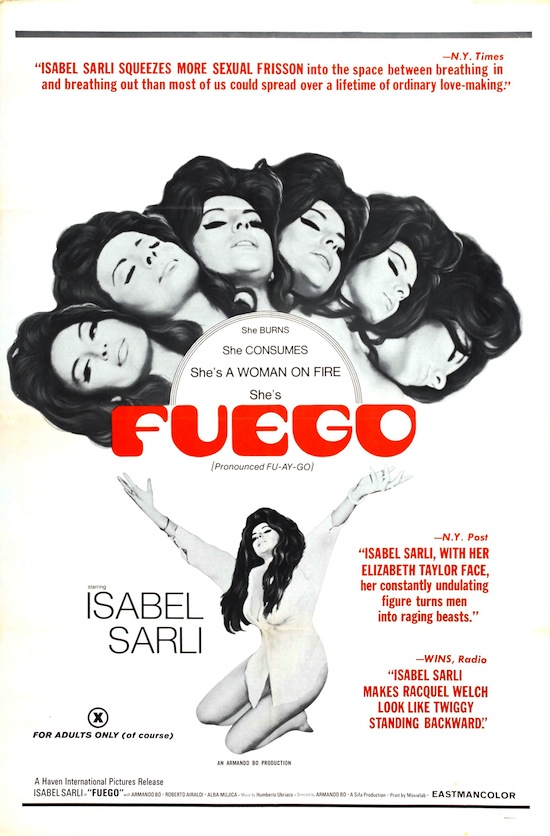 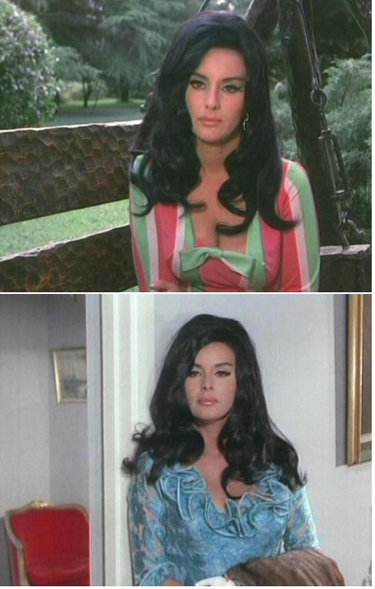 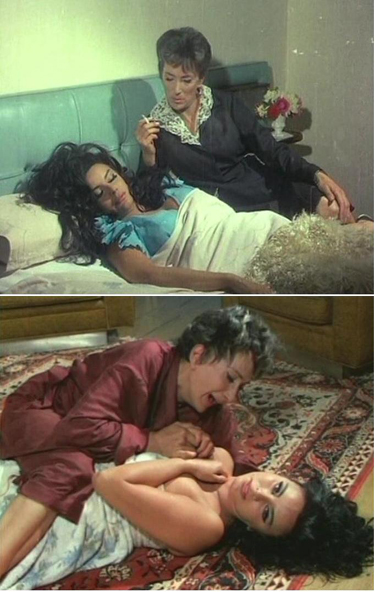 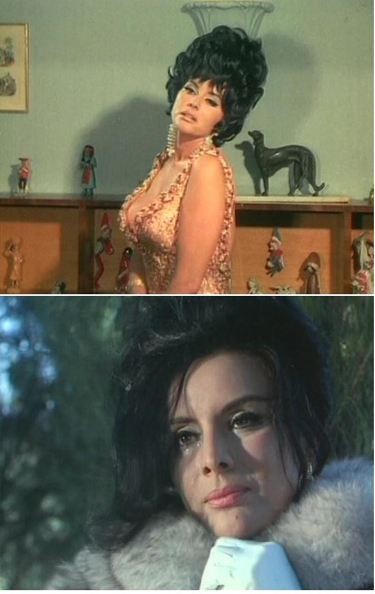