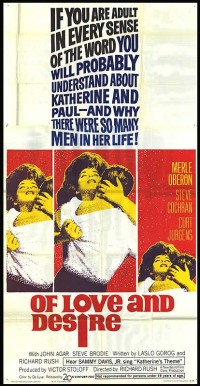 If you are an adult in every sense of the word, you will probably understand about Katherine and Paul – and why there were so many men in her life!

Part South of the border travelogue and part overheated melodrama, Of Love and Desire (1963) is a sherbet colored confection that will leave any bad movie aficionado salivating like a kid in a candy store.

What it’s all about: Shortly after arriving in sunny Acapulco, engineer Steve Corey (played by swarthy Steve Cochran) is whisked away to the home of wealthy mining magnate Paul Beckmann (Curt Jurgens). Steve feels a bit out of his element, for when he arrives, a swanky cocktail party is in full swing. A mariachi band (that doesn’t play mariachi music) winds through the crowds of finely attired guests. “I’m not exactly dressed for a party,” Steve apologizes to Paul’s sister Katherine (Merle Oberon).

“I’ll never understand why you men are never happy unless you’re all dressed alike,” she quips. In her tailored gown and upswept hairdo, Oberon looks like a matronly Holly Golightly.

Steve and Katherine flirt over conversation, drinks and dancing. Paul pointedly reminds his sister to behave herself. As the party begins to wind down, a contractor working on the same project as Steve tells him that Katherine may be just the girl Steve needs to forget about a recent broken engagement. “All you have to do is touch that dame and she goes off like a firecracker.”

As they stroll across the grounds of her brother’s home, Katherine comments on the beautiful night, despite the fact that the scene was obviously shot during the day. She asks Steve to accompany her to her nearby hacienda. While on their walk, Katherine reveals that Paul is her half-brother, a plot point that will prove important later on.

An unassuming street side door leads to Katherine’s secret garden. A heavenly choir “oohs” and “ahhs” as the camera pans across her verdant courtyard. After chatting about long-ago childhood games, Katherine offers Steve a nightcap. The proximity of Steve’s potent brand of masculinity sets her on edge and she accidentally drops his drink.

Up until this point, Of Love and Desire has been a colorful, if not unremarkable, melodrama. It’s when Katherine finally reveals her tortured desire for male companionship that the film kicks into high camp overdrive. A simple kiss goodnight unleashes Katherine’s inner wildcat. She pants and clutches at Steve, clawing at his shirt, leaving him momentarily stunned by her sudden passion.

“Did I give in too fast for you? Didn’t I play the game right? Just what do you need to make you feel like I’m a conquest? I should have pretended longer, but just how much longer… one hour… two?” she cries.

One second she’s literally begging for it, the next she’s shedding overwrought tears of shame. Katherine’s obvious schizophrenic sex addiction would send any sane man running for the hills, so what does Steve do? He takes her in his arms, lowers her down onto the couch and kisses her.

Church bells ring while the sun also rises. Steve awakens in Katherine’s bed, but finds her outside enjoying a morning swim. “I wish I were as young as you make me feel,” she coos. It has to be said that for a woman of fifty-two, Oberon cuts a rather fine figure in her two-piece swimming ensemble.

She asks him to join her in the azure waters of her garden pool. Steve goes to change in the poolside bungalow and finds several pairs of men’s swim trunks, all of which have been presumably left behind by Katherine’s previous lovers.

Paul interrupts their swim. It doesn’t take a genius to figure out what is going on when Steve’s bags are brought over by a valet. “He spent the night,” she heatedly confesses to Paul, “Katherine Beckmann with a total stranger!”

Later, after Steve has inspected the mining project, Katherine brings him a picnic lunch. “I’ve known you less than a day and I’ve made a fool of myself twice… am I doing it again?” She then makes an awkward genie comment, “Rub me right and make a wish.” Once again, Katherine’s mild stalking tendencies would send most men running. Steve finds it quaint.

Together they fly away on a Mexican holiday. They make love in the shadows of an Aztec pyramid and splash along the picturesque coast. One afternoon, while playfully tumbling around on the bed, the inevitable happens. She calls Steve by the wrong name. Oops. Talk about a mood breaker.

At an open air Mercado, she tells Steve, “I want to be different for you, young and exciting, so that you’ll never get tired of me.” Impulsively she has a local barber cut off her long tresses. “Now you can run your fingers through my hair anytime you want.” This isn’t necessarily true since her shorter, more sensible cut is just as severely styled and lacquered as her previous up ‘do.

Back from vacation, Steve admits that he loves her despite her past, “I fell in love with you anyway.” He asks her to marry him in a line obviously added in post-production. It’s a rather silly attempt to add some respectability to their whirlwind affair. It’s especially ridiculous since it has been made abundantly clear that there is nothing respectable about Katherine’s voracious appetite for the opposite sex. They kiss as the sun sets, church bells chime and the swallows return to Capistrano.

When Katherine tells Paul of her happiness, her brother reacts with a startling severity, “I’ve had to tolerate your sorted little affairs, I will not put up with this any longer. You are not to see this man again, I forbid it.” He quickly apologizes for his harsh words and they share a moment remembering times past. Though Paul’s fervent recollections about Katherine’s youthful beauty seem a bit odd.

Paul knows the only way to get his sister to forget one man, is to present her with another. While yachting with friends, Katherine is shocked to find that former paramour Gus Cole (John Agar) has been invited along. After a few drinks, the cad makes his move, “What’s the difference Katherine? It’s just another pair of pants. I wanna press the button and watch you melt.” She tries to resist, but the rape turns to romance as she tearfully submits to her own prurient desires.

Come morning, she shamefully realizes the betrayal she has committed against the man she loves and slits her wrists. Steve comes aboard to join the party and finds Katherine on the floor of her cabin.

Once Katherine is safe and convalescing, Paul explains that his sister’s neuroses are due in part to a love she lost long ago, “She goes from one to the other searching for a lost passion.”

As Steve prepares to leave, Katherine comes to say good-bye, “No excuse. If I had one, I’d give it to you as a going away present.” She then proceeds to tell the sad tale of her first love. She was saving herself for her wedding day. “I was a virgin. To me it meant so much. We wanted to be married, but Paul wouldn’t hear of it.”

All of her pain, guilt and regret are wrapped up into a tidy psychological package that serves to explain her trampy behavior. This girl clearly has some issues. Once again, Steve is presented with the option of a graceful exit, but does he take it?

“Katherine, I think you’ve served your time in hell. You come with me.”

“I’m an awful risk,” she warns, before hurrying back to her hacienda to pack. “I’m going away with Mr. Corey,” she joyfully tells her housekeeper. But when she sees the bandages on her wrists, an overwrought musical cue tells us that she’s changed her mind. “How could I have been such a fool?”

She has to get away from it all. As she packs, she angrily confronts her controlling brother, “You showed me what I am. I never want to see you again Paul!”

It’s now that Paul chooses to lay all his cards on the table. “Always torturing me with your affairs, throwing them in my face. Alone, always alone, because I can’t have what I really want.” This revelation could’ve been shocking and dramatic, if it weren’t for the lighting instrument that bobs in and out of frame.

After her brother’s incestuous declaration of love, Katherine flees the house in disgust. In a blind panic she runs, but everywhere she turns there are men. Men, MEN, MEN!

Through the streets and into a hotel lobby she runs until she becomes trapped in a revolving door. “Let me free!” she cries as the sequence builds to its loopy climax. Back out on the street she has nowhere to turn. There are men, men everywhere! Steve, who was on his way to pick her up, spots her and rescues her from her own hysterical theatrics. “I love you so much. Take me away from here.”

Even after this latest demonstration of Katherine’s instability, Steve still wants her. Is he a saint or simply a glutton for punishment?

As they take one last stroll through the garden, they notice that a portrait in Katherine’s likeness is missing from the living room mantle. “Poor Paul,” Katherine muses as she walks away with the man of her dreams. Forget about psychoanalysis and twelve step programs, true love and a respectable marriage are all this middle-aged neurotic sex-addict needs.

In conclusion: Of Love and Desire came towards the end of Merle Oberon’s long career. Since it isn’t every day that any actress of her years gets to play a sex kitten, Oberon tackles the role of Katherine with gusto. Women of a certain age being presented as still desirable was a radical concept for 1963. With the sexual revolution and the women’s movement just around the corner, it would have been interesting to see a story about a mature modern woman who fully embraces her own sexuality.

Instead, Of Love and Desire is an old-fashioned soap opera with a morality firmly entrenched in the 1950’s. Sex before marriage is bad. End of story. The resulting guilt and shame this causes for the film’s herione is what makes Of Love and Desire such a melodramatic treat for fans of cool cinema trash.

Of Love and Desire occasionally runs on cable TV. Sadly, it is not currently available on DVD. 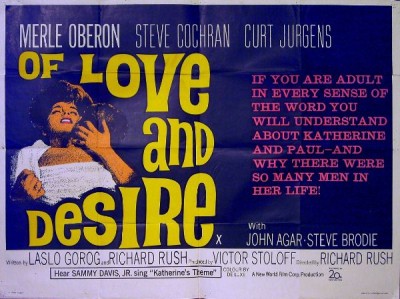