GayRomLit Retreat 2014 has come and gone and as I predicted it was a completely awesome experience. There is simply no other conference/meet-up for the gay romance subgenre that even comes close to what GRL can offer to readers and authors alike. Here’s the breakdown of how Jeff and I spent our weekend.

We spent Tuesday traveling. Our plane landed that evening and we hired a car to take us to the Indian Lakes Resort in the suburbs of Chicago. This year’s venue was beautifully appointed but oddly designed. I have no complaints about the accommodations, but to go from the hotel to the conference center (were nearly all events were held) you had to walk through a rabbit’s warren of passageways that took five to ten minutes to traverse. The additional exercise was actually kind of nice since warmed blood was needed to withstand the seemingly sub-arctic temperatures that met us most days in the conference center. The resort is also home to The Biggest Loser’s Chicago location. 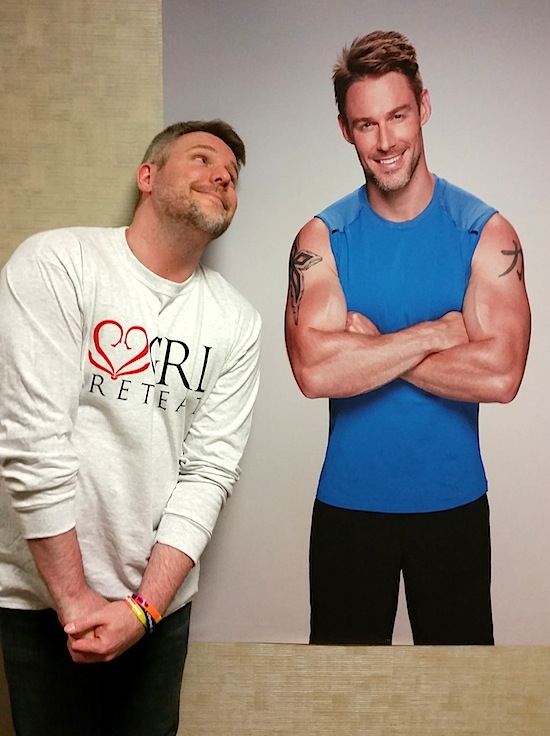 Taking a picture with trainer Jessie.

Jeff and I attended the Writer’s Workshop on Wednesday. I would consider this year’s version a workshop ‘lite’ compared to what was offered last year. Still, there was a lot to do and see. I especially enjoyed the enlightening and amusing presentation on blurb writing by the editors at Samhain. The roundtable workshop about working with review blogs was also fun and informative. The lovely and talented Madison Parker (official photographer of GRL) was taking author photos, so we had those done as well. 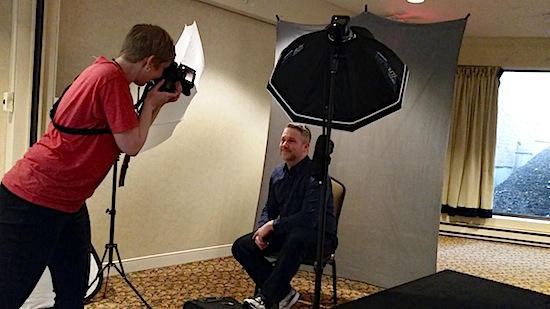 Thursday, the first official day of GRL, started with the opening of the swag room. Swag, for the uninitiated, are the free promotional goodies authors give out to attendees. Jeff and I usually avoid the crush of humanity that occurs when the doors first open (imagine Thanksgiving shopping crowds, but with booklovers). The most desirable swag items (books & tees) were long gone by the time we made it to the room, but we still got some nice stuff. Jeff, as a supporting author, also had space in the swag room. His promotional CD (with a pdf short story and other excerpts) proved to be quite popular.

The Supporting Author Book Signing was also that morning. Jeff and dozens of other authors got to sign books and talk to readers. It seemed to me that everyone had a great time. Jeff was certainly kept busy for the two-hour session. 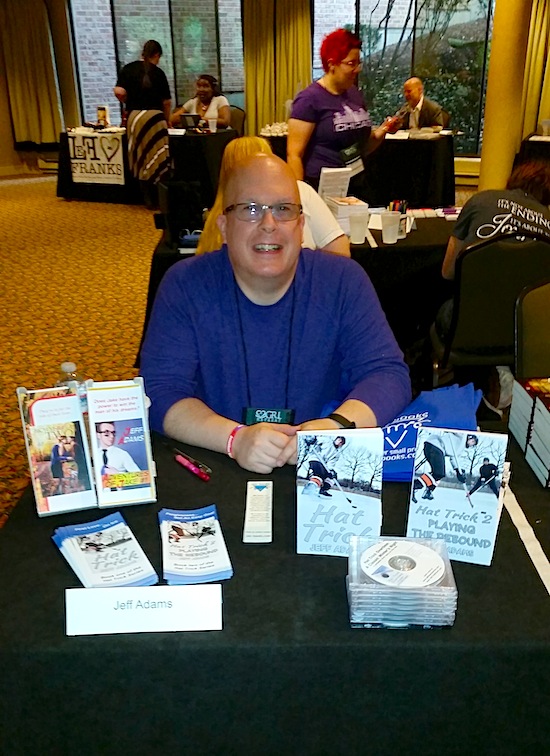 Jeff ready to go at his table for the signing.

A panoramic look at the signing.

Later that night was the Opening Reception. Jeff and I arrived late and missed the official announcement that GRL 2015 will be in San Diego. Needless to say, since we now live in California, we’re planning a road trip for next October. 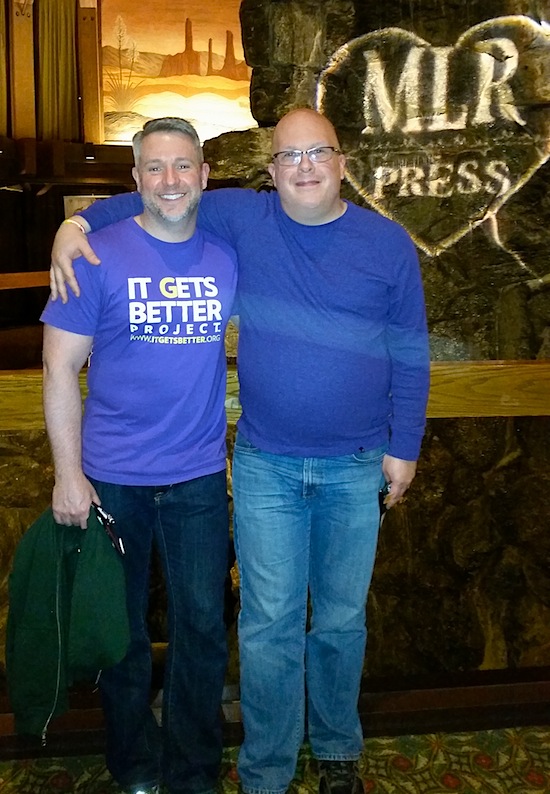 Each night of GRL is a sponsored party. The Juke Joint has kicked off GRL for several years now, and everyone has a blast dancing the night away. Jeff was taking part in a group interview for Writer’s Online Network, so I braved the party solo. I had a drink and talked with friends and was about to call it quits when Jeff finished up and joined me. We hung out for a little while longer (we’re not exactly party animals) and got a picture with one of the adorable go-go boys. 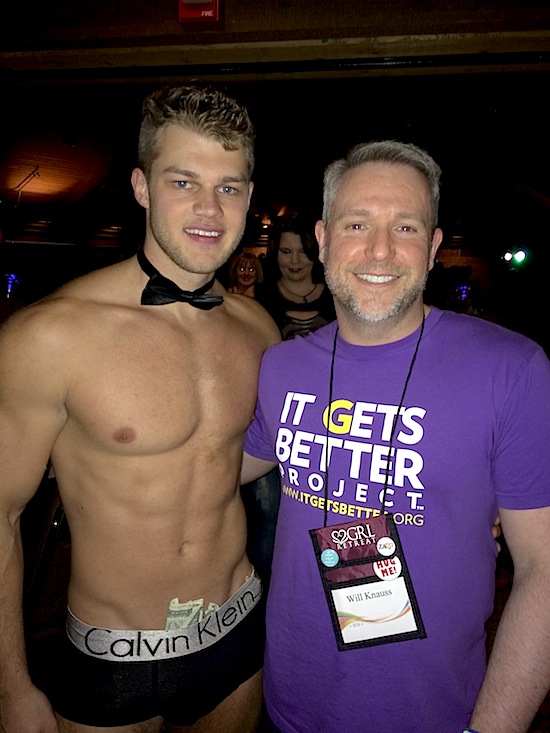 With dancer Derrick … and JP Barnaby peeking out between us.

After breakfast Friday morning we went to the Series Romance panel featuring T.A. Chase, Devon Rhodes and Carol Lynne. Could there be three more funny, talented and prolific ladies than these? I think not. After that we went to an author reading that featured our talented friend Geoff Knight. Kudos to him for his reading from The Pearl.

I decided to rest for the remainder of the afternoon while the Fun/Craft Fair took place. Jeff succumbed to a nasty stomach bug that evening so we skipped the casino-themed party.

Saturday was a slow start for us, but we did get to the author panel with Z.A. Maxfield, K.A. Mitchell and Jordan Castillo Price who espoused the joys of writing snarky/sexy heroes. Later we attended Samhain’s Sausage Fest, a sausage themed cocktail party with a yummy buffet (I admit, I went back more tham once).

That night was the Time Travel costume party and for the first time (this was our third GRL) Jeff and I went in costume. We had a few drinks, talked with friends and took tons of pictures. It was lots of fun. 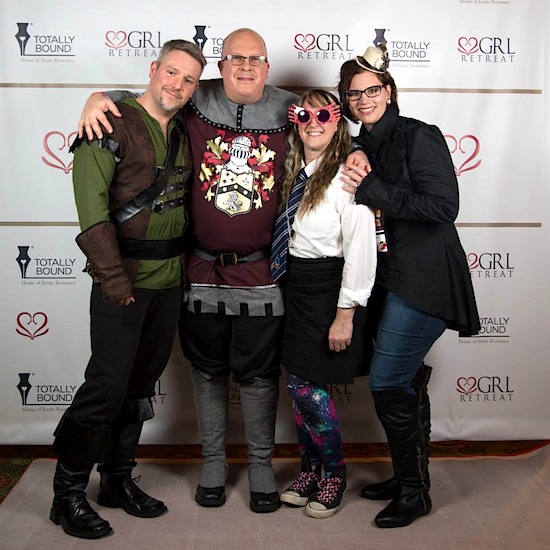 with Wade and Taryn at the Time Travel Costume Party

Sunday morning meant attending the Farewell Brunch, which is a great chance to have breakfast and say good-bye to everyone before they head home. Jeff and I were legally wed in NYC in late October, so each year we’ve attended GRL, we’ve celebrated this particular anniversary sometime during the weekend. Sunday was the Anniversary date, so we went into Chicago to see the Joffery Ballet’s new production of Swan Lake. Needless to say, it was amazing. Jeff wrote a review that you can read here. When we arrived back at the hotel, we went and had a quiet dinner with some author friends. It was a perfect way to close an exhausting but rewarding GRL.

I should point out that I’ve only detailed a fraction of the activities that were available for attendees to partake in. As I’ve said before, there is no other event that caters so exclusively to the dedicated readers and writers of gay romance. If you’re a reader or a writer who has been on the fence about attending GRL, it should come as no surprise that I whole-heartedly encourage you give it a go. Jeff and I have been to the events in Albuquerque, Atlanta and Chicago. We’ve loved every one.

I didn’t even mention all the terrific discussions Jeff and I had with authors who were more than willing to share their insights into the business and craft of fiction writing. I personally know of no other genre where the authors are so generous with their time and are willing to help writers who are just getting started in the business. 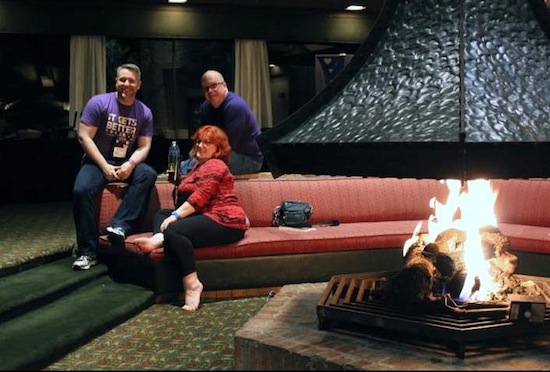 Sunday may have been the last day of our GRL adventures, but our vacation continued as business took Jeff to New York and I tagged along. Not too much to tell about this particular NYC jaunt, but we did see some of Broadway’s latest offerings. I went to see The Country House and the latest revival of On the Town. My thoughts on those productions can be found here. Jeff and I also saw the star-studded It’s Only a Play, which Jeff reviewed here.