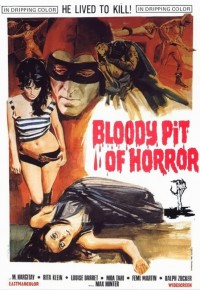 He was a homicidal maniac who lived to kill!

The star of Bloody Pit of Horror (1965), Mickey Hargitay, is probably best remembered as the former Mr. Jayne Mansfield. Like many musclemen of the era, Hargitay found a certain degree of fame starring in European costume pictures, most of them made in Italy. Oddly enough, despite his impressive physique, Hargitay played Hercules only once opposite his bombshell wife in The Loves of Hercules (1960).

You know you’re in for a special treat when a movie starts with a quote by the Marquis De Sade. “My vengeance needs blood!” (Insert maniacal laugh here) Part Italian horror film, part muscleman movie, Bloody Pit of Horror (1965) is a uniquely strange cinematic hybrid.

What it’s all about: The movie begins with a flashback of a red-hooded criminal being led to his death. Helpful narration explains that the aptly named Crimson Executioner “…took life not from any sense of justice, but from hatred and self gratification.” As the prisoner is being strapped into one of his own torture devices he loudly proclaims, “I’ll return and be avenged!”

The iron maiden looks like it was constructed for a grade school play. The coffin shaped prop is clearly made of painted plywood and its deadly spikes are unmistakably rubber that look anything but sharp. Still, when they close the door he screams in agony and the camera pans down to reveal blood oozing out the bottom.

A clock ticks away the years as our narrator chimes in with this helpful piece of voice-over, “Your castle will stand throughout the centuries as a reminder of the barbarism and cruelty committed within its walls.”

Flash forward to a photographer and his models arriving outside the castle doors. The abandoned castle looks to be the perfect spot to shoot their pulp fiction book covers.
Kinojo, the exotic one, has an eerie premonition, “There’s something evil about this castle. I’m sure of it.”

Her boyfriend Perry dismisses her female intuition, “You Hawaiians are far too impressionable.”

As the gang begins to explore, they find that the castle isn’t abandoned after all. The reclusive Travis Anderson (Hargitay) is the master of the house. He orders them to leave, but reconsiders when he sees the photographers prim assistant Edith. They can finish their work, but must go in the morning.

While Edith helps the girls get ready, Perry and Raoul go off on their own to explore the dungeon. After being frightened by a bat (made of rubber and suspended on a string) Perry disturbs the final resting place of the Crimson Executioner unleashing his shadowy spirit.

In a comedic montage, Dermot the photographer tries to get some work done by posing the uncooperative girls in various states of peril. A girl being stabbed, a girl being strangled, a girl en pointe ballerina-style in a cat mask (don’t ask).

While the group sets up for the next shot, Raoul coaxes Suzy downstairs into a dark and cozy corner of the dungeon. Suzy limply protests when he starts to get fresh. “Let me alone Raoul, I’m scared.”

In all horror movies (even Italian ones) sex equals death. The reincarnated Crimson Executioner soon makes his appearance. Raoul does his best to defend his lady love but his back is quickly broken when the Executioner traps him in a half-nelson/death grip. Since he resembles a Mexican wrestler in his red tights and cowl the wrestling move seems apropos. Suzy is next. She cowers in the corner, helpless, as the Crimson killer moves menacingly closer, and closer, and closer…

In another part of the castle a new shot is being set up. As a model in the photo, Perry lays down on an antique torture device. Suddenly the pendulum swings and he is sliced to death. “The rope was badly worn.” Max the crass book publisher attests, “We overlooked that I’m afraid.”

After the terrible accident the girls want to leave, but Max is only concerned with getting the job done.

“My life’s worth more than that.”

As luck would have it the castle has a dark room. When Dermot develops the photo taken during the accident, it reveals a mysterious figure in the background. A man in a mask and hood. When Travis sees the photo he takes our group on a walking tour of the castle and explains the history of the Crimson Executioner. “…for centuries he was entombed there in the dungeon and only a seal has protected mankind from his supernatural powers. If the shadow in the photograph is the Crimson Executioner I fear anything might happen. I had to tell you.” What a considerate host.

When Rick and Dermot find Suzy’s pierced corpse inside the iron maiden, Rick (with his background as a former journalist) assess the situation. “At this point there’s only one explanation… deliberate murder.”

While Rick rounds up the models, Dermot goes for help. He doesn’t get very far. With an arrow through the neck, Dermot lays slumped over the steering wheel of his sports car, driving in an endless circle in the castle driveway.

As Rick and Edith search for the other girls she reveals that she was once engaged to Travis. “He used to be a muscleman in costume films. He’s always been a little strange.” After hearing Kinojo’s cries for help, they discover her trapped in the “spider room”. The scene that follows is possibly the weirdest in the movie, and that’s saying a lot.

Poor Kinojo has been suspended from a giant spider’s web and the room is criss-crossed with steel cables attached to cross-bows, making it impossible to reach her.

“Don’t you see? It’s a diabolical trap!” If that wasn’t bad enough, a bizarre spider creature, with poison in its claws, threatens her life. One thing the movie doesn’t make clear is whether this bug is supposed to be an actual spider, or some kind of mechanical menace. At any rate, it probably isn’t supposed to look like a lumpy piece of paper-mache that any third grader could have built. It looks that silly. Rick makes an attempt to save her by shimmying underneath the wires, but he is too late.

Edith is then captured and taken to Travis’ chambers. It is here that he reveals his true nature. Travis is a narcissistic sadist. “Mankind is made up of inferior creatures who would have corrupted the harmony of my perfect body.” While delivering a lengthy monologue on the virtues of his physique, Hargitay massages oil across his torso and dons his Crimson Executioner drag. Using a secret passage (don’t all good haunted castles have them?) Travis makes his way down to his private torture chamber where the fun really begins.

We reach the climax (of the movie) when Rick arrives to save Edith. For a wimpy guy in a cardigan, Rick surprisingly holds his own against the Executioner. But it looks to be a classic case of brains over brawn when Travis is out-smarted and impaled on one of his own torture devices.

At deaths door he bemoans his fate, “My pure body has been contaminated…the body of the Crimson Executioner!”

Rick takes Edith in his arms as she pleads, “Please take me away from this castle. It was a nightmare.”

In a contemplative mood, Rick answers, “I won’t write any more horror stories. The man that said life was stranger than fiction made no mistake.”

No stranger than this movie Rick.

Included is a clip from Primitive Love (1964), a crazy comedy starring Jayne and Mickey, and a clip from Cover Girl Slaughter. There’s also a gallery of exploitation movie art. Included on the disc are some deleted scenes, though they might be more accurately described as extended scenes. Moments that show the girls exploring the castle, getting ready, posing during the photo shoot, that kind of thing. Although the movie is unrated and the back cover warns of graphic violence and nudity, there is in fact no nudity (the girls are scantily clad, not naked) and the violence is nothing more extreme than would receive a modern R rating.

Bloody Pit of Horror is sometimes kinky, at times weird but always hilarious. An homage to bodybuilding and masochism that shouldn’t be missed.