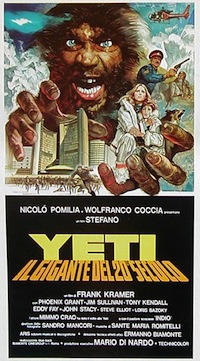 So big, so strong, but so gentle. You will learn to love Yeti!

In the mid-seventies, movie producer and marketing genius Dino De Laurentiis convinced nearly everyone on the planet that they just had to see his big-budget King Kong (1976) remake. Suddenly, big apes were a very hot commodity. To cash in on all the publicity, several other producers (from several other countries) made their own versions of the classic tale.

The Italian-made Yeti: The Giant of the 20th Century (1977) starts off promisingly with a sweeping orchestral score (“inspired” by Carmina Burana) and impressive footage of glacial ice crashing into the sea. But it quickly becomes apparent that this is just another wonderfully cheesy Kong rip-off.

What it’s all about: A well meaning Professor (John Stacy) is asked by the “over nourished, over weight, Daddy Warbucks” type industrialist Morgan Hunnicut (Eddie Faye) to head a “humane expedition” to study the Yeti, who was discovered frozen in ice and floating off the coast of Newfoundland.

“An avalanche probably caught him while he was sleeping on the ice millions of years ago,” the Professor theorizes, “Then perhaps an earthquake caused the ice to break up and fall into the Arctic Ocean.”

In a perfect example of Bad Movie Logic, Hunnicut lays claim to the Yeti and boasts, “That monster is gonna be the new Hunnicut Enterprises trademark!” Apparently, consumers won’t be able to resist a prehistoric beast schilling for a multi-national corporation.

Hunnicut’s grandchildren, Jane (Phoenix Grant) and Herbie (Jim Sullivan) are also present during “Operation Yeti”. The oddly androgynous Herbie (whose only friend is his dog Indio) has been mute since a plane crash killed the children’s parents.

Once enough of the ice has been melted with flamethrowers, the Yeti is loaded into a specially constructed Plexiglas container that looks like a British phone booth. In a procedure similar to mothers who give birth in those special Jacuzzi tubs, the Yeti is airlifted via a helicopter (an effect achieved with a model chopper carrying a Yeti doll) to 10,000 feet where he’ll comfortably thaw at an altitude similar to his Himalayan home.

“The Yeti is part of nature,” the Professor pontificates, “Only she should give him life if she so chooses.” The Yeti (Mimmo Crao) bears a striking resemblance to the Bigfoot that guest starred on the popular television show The Six-Million Dollar Man. The only difference being that the Yeti has an impressively styled bouffant hairdo. When the one-million-year-old giant awakens in the twentieth century, he gives a shrieking war cry that shakes the model helicopter. When they land at base camp, the Yeti (not too surprisingly) breaks free and wreaks havoc among the scientists and paparazzi.

Yeti rescues Jane and Herbie from the panicking masses and carries them away. While in the Yeti’s hairy paw, Jane places her hand on his chest to steady herself. Yeti apparently likes her sensitive touch because his giant nipple gets hard! Yeti sets up house in the Canadian wilderness and brings his new friends some freshly caught seafood.

Herbie’s pet collie does Lassie proud and goes to fetch the Professor. When help arrives, they find the Yeti using the skeleton of the fish he’s just eaten to comb Jane’s hair. With his keen eye for behavioral science, the Professor tells Jane, “He’s adopted you as his family. He’s mistaken Herbie for his son and maybe you for his wife.” Yikes!

Cliff (Tony Kendall) the ruggedly sun-tanned Hunnicut representative crudely articulates what everyone must be thinking, “She might have some duties to perform if she stays overnight.” Double yikes!

When Jane uses a giant can of generic hairspray to tend the Yeti’s wounds, he makes wistful goo-goo eyes at her. “Yea-tee, come,” She commands and Yeti follows his friends back to base camp. Though the Yeti has only just been revived, an aggressive publicity campaign has already swept the country. Hunnicut has diversified into every conceivable industry. At a gas station, drivers are encouraged to, “Put a Yeti in your tank and you’ll have giant power!” At a mall kids clamor for merchandise, including cheeky t-shirts that read: “Kiss Me Yeti”. Meanwhile, a consortium of Hunnicut’s rivals elects the double-dealing Cliff as their new boss.

The Yeti is loaded into his repaired cage and flown over Niagara Falls on his way to Toronto where he is greeted by a parade. The “Yetians” sing a disco version of his theme song. “He is sooo big, the man of snow,” they warble, “But he won’t harm you, the Yeee-tiii.”

Yeti makes his Toronto debut atop a Hunnicut Hotel where flash photography predictably irritates him. Mayhem ensues and the fleeing crowd sweeps Jane into a glass observation elevator. Hilariously, Yeti grabs the elevator cables and begins to yank them up and down like a yo-yo. When the floor of the damaged elevator gives way, Jane is left dangling thirty-two stories above street level. To save his beloved, the Yeti climbs down the outside of the building and grabs her in the nick of time.

With a miniature Jane in his hand, the Yeti strolls through downtown. Despite being several stories tall and kind of hard to miss, Jane and the Yeti evade the local police and hide in a warehouse. Hunnicut sends the Professor to look after the ailing Yeti, whose life is threatened by two goons on Cliff’s payroll.

“If the Yeti doesn’t get oxygen within the next ten minutes he’ll die!” The Professor ends up paying for this diagnosis with his life. As the Yeti helplessly watches, the henchmen beat the Professor to death. Once the Yeti is revived with a fresh tank of oxygen, he goes after the two goons. One falls while trying to escape the monster’s wrath. Yeti’s oversized foot traps the other, but he isn’t squished. Instead, Yeti strangles him between his giant hairy toes!

When Hunnicut is informed of the Professor’s death, it’s hard to tell whether he’s overcome with grief or just constipated. At the warehouse, Herbie is caught eavesdropping on Cliff’s diabolical scheming. They hold him at gunpoint (unless the kid is really good at charades, who is he going to tell?) confirming Jane’s suspicion that there’s been foul pay concerning her gigantic friend. Indio, the faithful Collie, is stabbed by one of Cliff’s henchmen while trying to protect the children.

“I know what a worm you are now!” Jane shouts at Cliff as she smacks him one. He smacks her right back and is in the process of chocking her to death when Yeti smashes through the warehouse wall and comes to her rescue. Cliff makes a fast getaway with Herbie as his hostage. The scene suddenly switches to day as Cliff and his cohorts race up a mountain road. Yeti tosses a tree on one car, a boulder on another, and is waiting at the top of the hill when the car with Herbie arrives. The two remaining goons are so frightened that they run away and proceed to fall off a cliff!

Once the Yeti safely retrieves Herbie, he goes after Cliff, who tries to run him down with a construction crane. Yeti flips the vehicle (actually, it’s the Tonka truck equivalent) and stomps on his nemesis.

Before the authorities shoot the Yeti, Jane soothes the savage beast with her own brand of Yeti-speak. “Boy…Girl…thank you, but please go away. This world is not for you. Go back to the wilderness, to the mountains, where life is like you knew it.”

Unbelievably, Yeti seems to have comprehended every word. “Good-bye Yea-tee,” Jane calls, as the police chief gives her a funny look… he can’t seem to believe it either. With a single tear running down his cheek, a sadder but wiser Yeti returns to the great frozen North, accompanied once again by that groovy theme song.

But it ain’t over yet.

Like a phoenix rising from the ashes, we hear the heroic bark of Indio. Man’s best friend is reunited with his master in an unintentionally hilarious moment. The boy and his dog run toward each other in slow motion as if they’re in some kind of oddball lovers montage. It certainly brings new meaning to the term “animal lover”. Triple yikes!

In Conclusion: Considering the number of effect shots in Yeti: The Giant of the 20th Century, it seems that the producers were fully invested in making a serious fantasy/adventure film. All the blue screen process work couldn’t have been cheap and shows that a lot more thought went into making Yeti than some of the other low-budget Kong movies out at the same time.

That being said, all that time and effort didn’t necessarily make the effects any less cheesy, and that’s a good thing if you’re a lover of Cool Cinema Trash. While some of the blue screen work is fine, most shots look pretty shoddy. In one scene, Herbie’s blue coat magically changes color. Since his blue jacket would appear invisible against the blue screen backing, his jacket is replaced with a tan one. Once the special effect is complete, his jacket returns to blue.

A full-size Yeti was also constructed for use in certain location shoots. It looks just as ridiculous as the towering robot Kong De Laurentiis made for his movie but, in both cases, they only appear briefly in each film.

DVD copies of Yeti are difficult, but not impossible to find. This kooky take on the “giant monkey on the loose” genre can occasionally be found on auction websites and online specialty shops that deal in hard-to-find and obscure cult movies.