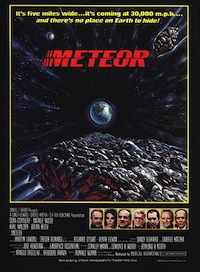 As part of its attempt to compete with the major studios, American International Pictures (AIP) produced Meteor (1979). Best known for beach party movies and low-budget horror and sci-fi films, AIP was counting on Meteor to be its big-budget prestige blockbuster. Unfortunately, no matter how much (or how little) they spent on special effects or an all-star cast, the movie’s low-budget origins were always apparent. It tries so very hard to be like the other disaster hits of the era, but fails in nearly every attempt. This is why Meteor is an endearing Cool Cinema Trash favorite.

What it’s all about: The opening titles that swoop across the screen superman-style are accompanied by an Age of Aquarius musical intro that sounds like it came from Wayne Newton’s Las Vegas revue. A title card (an attempt to build suspense?) counts down the days until earth’s destruction.

Monday – Sean Connery, formerly of NASA, is plucked from his sailboat mid-race to meet with Karl Malden, who sets up the movies premise through flashback.

A U.S. space probe is destroyed while it observes a comet passing through an asteroid belt. A huge chunk of Orpheus (the antagonist needs a name, right?) now threatens earth. This sequence displays the shoddy effects work that will plague the rest of the film. There’s nothing wrong with old school techniques, as long as they’re done well. That’s not the case here. The models, which get an inordinate amount of screen time, never look larger than their actual twelve to twenty-four inch dimensions and the process matte shots look consistently sloppy.

Connery had developed an intergalactic defense system to counter such a threat, but the government overtook the project for military use. He begrudgingly agrees to help and, as he leaves, delivers the movies best line, “What do you want me to do? Stick a broom up my ass so I can sweep the floor on the way out?”

While reading a dossier on Hercules (the project he created), Connery stares at the space age chandelier in his hotel room which, we soon see, looks a lot like the orbiting Hercules missile station. Even though it happened mere moments before, Connery hears Malden’s dire prediction in an audio flashback, “There’s a chunk of Orpheus heading towards earth, a pretty big one. Six days from now we could be hit.” This doomsday prophecy prompts the first of many meteor close-ups. Laurence Rosenthal provides Orpheus with his own theme song, a giggle inducing ominous guitar riff.

Tuesday – Connery reads a newspaper whose top story is the space observatory disaster. The headline reads: What Went Wrong? The producers of Meteor were probably asking the same question.

Malden, in his own uniquely hammy style, spells it out. “That meteor is five miles wide and it’s definitely gonna hit us!”

The Cold War political machine is soon set into motion. President Henry Fonda acknowledges the existence of Hercules and that to destroy Orpheus they will need the help of a similar Russian weapons system called Peter the Great. In a poor composite shot Orpheus passes, then eclipses the sun.

Wednesday – In a top secret facility underneath New York City our cast assembles, including Russian delegate Brian Keith and his translator/assistant Natalie Wood.

Thursday – As the meteor plods ever closer, the political haggling continues. Neither side is willing to fully admit the extent of their nuclear arsenal. Complicating matters is drama queen Martin Landau, a general whose panties are in a perpetual bunch over the most insignificant protocol breeches.

Friday – The first pieces of Orpheus strike earth. In the middle of a frozen wasteland a Siberian family must flee into the night when a meteorite crashes into the mountains. While Keith sleeps off his jet lag, Connery has a chance to chat up Wood. After the long version of her life story he gets the information he’s really after. She’s a cosmonaut’s widow. “And now, is there anyone?” he asks.

“Nothing serious, not really.” She cryptically answers.

After a harmless meteor shower in Europe, the pompous Landau asserts, “It’s a pity the world has been sent into a state of unnecessary panic. That’s your threat Dr. Bradley, a fireworks display.”

Connery’s patience is wearing thin, “Tell this asshole once and for all that Orpheus will not burn up, it’s too damn big!”

Landau has a screaming hissy fit and storms out. After witnessing such a scene, Keith unleashes his own verbal tirade (entirely in Russian) giving the U.S. complete support and the use of Peter the Great. This Glasnost pairing is celebrated with shots of Russian vodka. In an extended sequence, we watch as the satellites are very slowly repositioned, turning away from earthbound enemies, to aim at the interstellar threat.

Saturday – A meteor fragment hits a Swiss mountaintop, burying an Alpine ski chalet and snow bunny Sybil Danning. This avalanche sequence contains an awkward marriage of location shots and miniature work. What’s even worse is that it also contains stock footage from another movie, Avalanche (1978).

In the oval office, Malden briefs the president on the plan to blow up Orpheus. “Get rid of it,” is Fonda’s executive order.

Sunday – As our scientists wait for the chance to launch their missiles, Wood grills Connery about his personal life. Things are just starting to get cozy when there’s a report of a giant “splinter” that has created a tidal wave heading for Hong Kong. Asian extras flee Godzilla-style as a stock footage wave heads right for them. A brave fisherman attempts to save his wife and child, but they’re submerged by some soggy special effects.

Tense moments pass in New York as the Russian missiles are finally launched. Seeing that the world has indeed gone to hell in a hand basket, Landau returns to eat crow. After shaking Malden’s hand he offers, “I’ll be in my office…if you need me.” Not very likely, but it’s the thought that counts.

As they prepare to fire the remaining U.S. warheads, they receive word that a meteorite is headed straight for NYC. As the launch begins and the missiles slowly embark on their trip towards Orpheus, a blazing ball of fire moves through the sky over New York. The destruction of New York should have been the movies spectacular highlight, instead it’s laughably been done on the cheap using tinted demolition footage!

In this post 9/11 age, watching monuments being destroyed can sometimes be unsettling. In the one concession to a restricted budget, the effects team on Meteor blows up a model of the Twin Towers. But, like everything else in the film, the moment is so poorly realized that it’s difficult to tell just what exactly is being destroyed. That being said, the Meteor DVD, released sometime in 2000, prominently features stars Natalie Wood, Sean Connery and an exploding World Trade Center in its cover art.

The New York underground facility takes a beating, columns fall, chandeliers crash. When the dust settles it appears that all our major stars have survived. The only exception is (thankfully) Martin Landau, making Meteor one of the disaster movies with the highest all-star survival rate.

With the main entrance blocked by debris, our ragtag group of scientists must make their way to the surface via a subway tunnel. The weakened walls of the tunnel crack and the muddy waters of the East River begin to flood the passageway forcing extras and stars alike to fight their way through the filthy, slimy mess.

In outer space, the nuclear warheads finally reach Orpheus and the massive charcoal briquette explodes in a fiery cataclysm. The global threat is over.

Back on earth, a smoldering matte painting reveals a giant crater in the center of Manhattan.

After making it out of the subway, Keith and Wood board a plane that is homeland bound. Connery gives Wood farewell kiss, and as the plane flies away, an informational slide appears. Attempting to bridge the gap between science fact and science fiction, a voice-over tells us that in 1968 the brains at MIT developed Project: Icarus to combat a global threat like Orpheus. Whew. We’ll all rest easier knowing that a plan created over fourty-five years ago is protecting us from cosmic destruction.