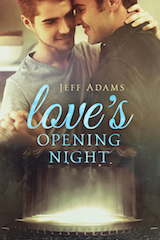 Here’s an excerpt from Love’s Opening Night which features Jeremy being helped by Ty.

The pianist played the opening chords of the song and we were off. Unlike yesterday’s rehearsal, I couldn’t pay attention too much to what Ty was doing. I caught some glimpses, and it looked good. As we hit the last thirty seconds, I went into what would’ve been the wings, had we been on a real stage. Nate, Marco, and I hit our places for our leaps. Nate went, followed by Marco, and then me.

“Argrgh!” No. No. No. My right foot slipped as I landed. I crashed hard to the floor and my right knee went into my stomach, pushing the air out of me.

Nate was next to me in an instant.

“Stop,” Madi said just as the music was hitting its final chords.

The ensemble encircled me as Nate called for someone to bring ice. I was scared to move. I needed to get my leg out from under me but didn’t want to risk more damage.

Ty broke his way through the circle of people, with Madi right behind him.

“I don’t know.” I sounded like I was on the verge of a freak-out, which I was, but I didn’t want to do that here. Not in front of Ty and not in front of the producers.

I tried to gently move so I could unfold my leg, but I couldn’t get the leverage.

“Here.” Ty put an arm under my shoulders as well as a hand just under my butt and lifted me just enough that I could move my leg. Once Nate saw I was moving, he helped straighten it out. Luckily my leg didn’t hurt. It was my foot that throbbed.

Allie arrived with ice and Nate slipped my shoe off. He draped the chilled bag across the top so it touched my ankle on both sides.

“Ladies and gentlemen, please bear with us for a few minutes while we see if we can restart,” Madi said as she turned back to address the producers, seeing that everything was under control for the moment.

“What do you think?” Ty asked quietly so Madi could continue with the producers. “Bad?”

“It fucking throbs,” I said, whispering while cringing at my language. I didn’t swear often, but I didn’t do hurt well. “What’d I slip on?”

“We should get you to the hospital and have you checked out.” Darci knelt next to Ty.

“I’m so sorry.” I switched from being in pain into upset for the disruption.

My mind created some worst-case scenarios that would have me out of the show before it even started.

“It’ll be okay,” Darci said. “We’ve got time.” She knew exactly where my mind went.

“You can use my car.” Ty took control of the situation. “Can you get my phone?” He looked to Nate, who was still across from us. “It’s in the front pocket of my backpack.”

Nate nodded and leaped to action.

I could hear Madi stalling with the producers, hoping we’d be able to show more before they had to go.

“Nonsense. I’ve got a car that just waits around for me to go somewhere. Let’s put it to good use.”

Nate passed Ty the phone and he typed. “Okay,” he said after a short delay, “he’ll be in front by the time we get down there.” He looked at me and his calm gaze put me at ease. “You ready?” I moved to get up but he put a hand—a warm, gentle hand—on my shoulder. “Nope. You don’t move.”

He scooped me off the floor so fast I couldn’t protest. Settling into his hold, I rested my head against his chest.

“Someone grab his stuff,” Ty said, without stopping, as we went into the hall.

At the elevator he leaned forward, and I pushed the down button.

“You really know how to take charge,” I said. He was so close I couldn’t look him in the eye. All I could see from my position was his chin and cheek.

“I hope you’re okay.” His voice was filled with concern.

What was that? It wasn’t his fault this happened.

He felt so good—warm, safe, strong. Nothing we’d done in rehearsal compared to the feeling of being held like this. The man was solid. He wasn’t even shaking as he supported me.

“He can go to New York-Presbyterian.” Darci jumped into the elevator with us, holding my bag. “Ricky’s calling ahead and Dr. Woodard will meet him there. He takes care of all the dancers on Ricky’s shows.”

Thank God my insurance was up to date. All the time in Wicked was about to pay off. I hadn’t been to the hospital in years. No one spoke as we rode down and exited the building. A black town car was waiting, and the driver opened the back door as Ty approached.

“Take him to New York-Presbyterian. Please stay there, and when he’s done take him wherever he needs to go.”

Ty set me inside the car. It was chivalrous and, despite everything, I was totally swept away by the gesture.