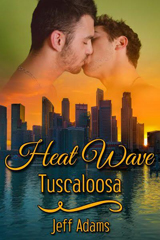 It wasn’t supposed to be a million degrees at one in the morning. Okay, it was eighty-seven, but it felt like a million.

When I walked into my apartment, I made the usual beeline to the air conditioner, turned it on and stood under one of the vents. The little bit of cool air was pathetic. The longer the heat wave went on, the harder it was to cool down. I’d noticed a breeze on the way in, so I wondered if it might be more comfortable outside.

I left the air running as I stepped out on to the balcony. It was pretty small, with room only for a couple of chars and a small side table. I used it rarely during the summer months, but enjoyed having it when it was cooler. I started sweating again, but at least the air was stirring a little. I wished really hard for either a polar vortex to miraculously blown in, or for Elsa to get pissed off and unleash the cold.

I went back inside and plowed through my bedtime routine. I thought about bumping the AC to full blast, and just putting it on the credit card, but common sense kicked in before I did something stupid. Instead I turned it off and hooked up the electric fan outside. The balcony was not as stifling as the apartment so I might get a better night’s sleep out there.

I positioned the table so the fan could blow right across me. I brought the chairs closer together so I could have my legs up on one while I sat in the other. With the slight reclining action, I was able to tilt back. It felt like an airplane seat, but with more leg room. I set my phone on the table with the alarm set for the usual six a.m. before I pulled my t-shirt over my head and kicked off my flip flops.

It took a few minutes to find a comfortable position, and when I did I vowed not to move the rest of the night. I had a decent view from my second floor perch. I could see part of the hazy sky with some starlight poking through. The hum of air conditioners filled the air as my neighbor chose to run up their electric bills. Up the hill from me was another building in the same complex. Only a few still had their lights on, which wasn’t surprising since it was a weeknight.

This was the most comfortable I’d been here in days. The fan’s breeze was delightful. It was still hot, but not as stuffy as it was inside. I closed my eyes, trying to let the hum of the AC units lull me to sleep. Unfortunately my mind was still preoccupied with the research I’d done earlier in the day, so it wasn’t ready for sleep yet.

I opened my eyes and looked at the sky for a while, hoping it would quiet my mind. I always enjoyed sleeping under the stars. When my family would go on camping trips, I’d make sure we had a good spot so I could sleep outside and pick out the constellations one by one until I fell asleep. As my eyes drifted across the sky, I was happy to find the Big and Little Dippers as well as Draco within my line of sight.

I looked up the hill and saw someone standing on their balcony. While their second floor overlooked my balcony, there was so little light I doubted he could even seen me. It looked like a guy, based on the proportions of his body, thanks to the broad shoulders and chest. He wasn’t much more than an outline, his lower half blocked by a chunky railing.

He stood there, looking out, surveying his surroundings, like a sentry. His head wasn’t moving so I imagined his eyes moving side to side. His hands were on his hips, so I could see the outline of his arms, which looked muscular from my vantage point. Had he spotted me yet?
[space]
[callout]