Last week’s story, about a carnival worker and a former child star turned out pretty well I think. You can be the judge over here.

Meanwhile, the Storymatic cards don’t seem to be aware that it’s the week before Christmas. Here’s what the draw was this week: 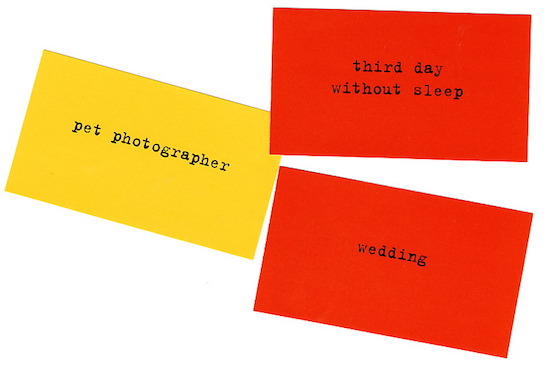 I suppose there could be a Christmas wedding to get this story into the spirit of the week. Come back next Friday to see how it turns out. And, if you want to take part in the FFF challenge, just post your story to your blog and leave the URL in the comments here.

This story was a lark. I actually wrote it Friday morning because I’d put it off because I had nothing in my brain. I’d intended to write super short and just get the cards done. However, which I found the idea, the story flowed. This one is less edited than most since I needed to get it posted an move on with the day. I hope you enjoy a little holiday romance though.

The Perfect Gift by Jeff Adams

The holidays were always a whirlwind for Nate. Everyone wanted to get their pets into holiday finery and onto their holiday cards, or in some cases turn a picture of their pet into large scale artwork to give as a gift. Nate’s business was like every other business during the season, busy, busy, busy. He was a talented photographer who got on well with pets. Today he wished he wasn’t that because he was dragging. Even worse, it was Christmas Eve and really wanted to be anything but tired. Realistically, however, it was the third day without sleep so tired was a natural state.

Nate thought he’d planned in advance with the extra staff, college interns to help process the pictures and other tasks, but he then took on to much work. It was hard to say no to anyone since he wanted repeat customers, and those were hard to get if you said no too often. The interns had done a great job, often going above and beyond the tasks needed and kept the season from being a disaster. He’d given the three of them large Christmas bonuses since he’d profited beyond expectations. He’d sent the last of them away about six hours ago so they could catch a bus home.

The day was almost done for him too as he framed one last twenty-four by thirty-six picture of a group of basset hounds. The woman it was for would be at the studio in about fifteen minutes. Once he passed over the picture, he’d be able to head up stairs from the studio to the loft where he lived with Marcus. Nate wouldn’t have to come back down here until the first Monday of the new year. Marcus was the best boyfriend. It was their fifth Christmas together and everything was perfect. As an emergency room doctor, Marcus worked crazy hours already, so he was  accommodating when Nate’s busy holiday season kicked in.

As Nate finished tapping the last nail on the frame, Natalie Dormer walked in the studio door. She was early, but Nate was ready for her and was thankful that it meant he could go upstairs even a few minutes earlier than planned.

“Just in time, Natalie,” he said as he turned the picture toward her.

“Oh, Nate, it’s perfect,” she said, as she walked up a couple feet away from the frame to regard it. “Shelly’s going to love having this in her dorm room. She misses the dogs so much when she’s away.”

“I’m glad you like it. I’m pleased with how it turned out too.” It hadn’t been easy to get five dogs to sit still and look at the camera, but Nate got the perfect shot after about twenty minutes of coaxing. “Let me get it wrapped real quick and you can be on your way.”

He pulled a long run of brown paper from the roll attached to the work bench and speedily wrapped the picture.

“Am I the last?” Natalie asked. She’d been a long time customer, often using her dogs and other pets in various combinations for holiday cards, or having Nate shoot family photos that included the pets.

“You are.” He applied the last tape to the package. “I can take this to the car for you, if you’d like.”

“That would be great,” she said and she led the way out of the shop. “Big plans for Christmas?”

“Marcus got tonight off, so we’re planning a quiet night in. He’s supposedly cooking up dinner and we’ll exchange gifts and actually sleep in tomorrow, which I think is the thing that excites us the most about it.”

He loaded the picture into the back seat, alongside some other gifts that were already there. He gave Natalie a quick hug.

“Sounds wonderful,” she said, returning the hug. “Shelly comes home tonight and Jasper’s home first thing in the morning on leave for the day. Breakfast will be our big thing in the morning. I hope you and Marcus have a wonderful night.” She walked around to the driver’s side.

“Give my best to everyone,” Nate said.

“I will. Now lock up and go home,” she said with a smile before she got in the car.

Nate watched her drive away before he went back inside. He didn’t even bother to put away the few things he’d used for the framing. He simply locked the front door, turned off the front lights, leaving just the one in the staircase door on. As he passed the counter, he pushed the button on the phone so that it would go to voicemail.

Nate went through the back door and headed up stairs. The stairway always made him smile because it was lined with images that he thought were among his best work. It was quiet as he got to the loft door, which was odd since Marcus usually had music playing. He didn’t consider that too long though as Marcus could be changing up the music to play.

Nate’s mouth dropped open as he came through the door. The loft was a blaze with hundreds of tiny white lights. The tree they’d put up a few weeks ago was still in place, but all these other lights hanging from the ceiling were new. Marcus stood near the tree, along with five of their closest friends, two of which Nate was sure had left town earlier in the day. They were all dressed in jeans and various types of white shirts. Nate was the odd one out with a blue shirt on.

“This is gorgeous,” Nate said. “What’s going on here?” Hearing himself, he thought he sounded like a child seeing the coolest thing ever, which all this light kinda was. He wished he had his good camera with him to capture it.

Marcus stepped forward and wrapped Nate in a hug. “Merry Christmas, Nate.” He then dropped down to one knee. He took one of Nate’s hands in his and opened his other hand to reveal a small box.

“Nathaniel Jason Knox, will you please marry me.” Marcus manipulated the box and opened it with one hand, revealing a thin silver band.

Nate thought for a moment that he might pass out from happiness, but instead he grabbed Marcus’ arms and pulled him up.

“Yes, yes, yes!” he said, with each word getting louder. He hugged Marcus tight, even lifting him off the floor for a moment. Their friends clapped.

“Come with me,” Marcus said, when he was standing on his own again. He took Nate by the hand and brought him to the tree.

Their friends fanned out. Carl stood in front of the tree. Martha and Derek were to the right while Brian and Rob went to the left. Marcus steered them so that Nate went to the right and he figured out what was happening.

Marcus nodded and Nate beamed. This was one amazing Christmas present.

Carl unfolded some documents and Derek handed over a clip board. “We’ve got to get the boring stuff out of the way first,” he said. “Sign next to the arrows I’ve put on these. They’re the forms and the license. Brian will sign after you do since he’s your witness.

“I can’t believe you pulled all this together,” Nate said as he signed. “I don’t know what to say.” He looked over at Brian and Rob. “And I thought you guys left this morning.”

“We were supposed to,” Rob said, “but when Marcus told us what he planned there was no way we couldn’t be here.”

“And when I told my mom why we were going to be in late tonight,” Brian said, taking the clipboard to add his signature, “she was all for it.”

“It helps to know a judge, too,” Marcus said. “I’d be impossible to pull off this surprise without him.”

“Thank you all. I… I hope you know I didn’t get you anything that comes close to this.” Nate looked at Marcus.

Carl did the basic ceremony and made everything legal and the small group cheered when Nate and Marcus shared their first kiss as husbands. Champagne was quickly popped and a toast was made.

“So,” Marcus said, “we are still having dinner tonight. I cooked just as I planned, although we do have guests with us.” He gestured with his champagne glass to the group. “We stay here tonight, but tomorrow morning we’re up early to catch a plane to Hawaii.”

Nate stared at him unbelieving. Marcus was scheduled for work. The schedule’d been on the calendar for weeks.

“Yes, I lied about my schedule. I called in a couple favors, and now I owe some too, so we could go away and have a proper honeymoon.”

Nate hugged his new husband again. The present just kept getting better, and he expected that would continue to be the case over the following week.