UPDATE ON NOV 10: Indeed I was crazy. Keeping up with FFF and doing NaNo at the same time doesn’t work. Flash Fiction Friday is on hold. This challenge will become the challenge of for November 28 and we’ll pick up from there.

Okay, I might be crazy. NaNoWriMo starts tomorrow and I’ve got a 50k words commitment to Hat Trick 3, but I’m enjoying Flash Fiction Friday and I want to keep it going during November. We’ll see if I can be successful with that, or if it becomes a writer fail.

The Storymatic cards Will drew for me certainly weren’t some easy ones like I’ve had on past Friday’s. Check these out: 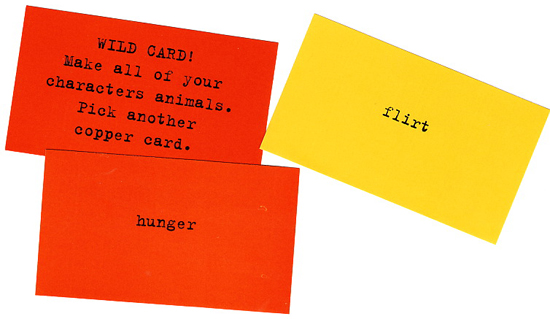 Seriously? I’ve got to make all my characters animals, who are apparently hungry for something and are flirting! These are not nice cards. That said, I’ve already been thinking about this today and have at least a shred of an idea percolating. Wish me luck!

Remember, you’re welcome to take part in the Flash Fiction Friday challenges. If you write up a story, post it on your site and leave the link in the comments here for me to read.

The idea I had when I first saw these card in October is ultimately what I ended up writing. I admit I’m not sure if the Wild Card had in mind what I did with one of the animal characters, but I did it anyway. Have a read and you can tell me what you think of it in the comments.

What the hell happened?

I looked around. It was dark, cold. I couldn’t move and the more I tried, the more restrained I felt.

Wait. I didn’t actually say that. I strained to focus my eyes on something, anything.

It was the vision that gave it away.

I should’ve gotten home well before full moon. This shouldn’t be happening

I pushed and strained to move what was keeping me in place. Since I was in wolf form I was stronger. Metal, creaked and ripped around me as I flexed my four legs and pushed out. My back pushed against what was confining me. A colder wind rushed around me as I opened up the space. I saw stars finally instead of just blackness.

This was my car. I recognized the steering wheel, hanging crookedly. Memories flooded back. I swerved to avoid a wolf in the road and ended up spinning out. I caught the smell of blood in the air. It wasn’t fresh, but there was a lot of it nearby. I nudged at more metal, and force one of the seats out of the way and got my front paws up on what used to be the frame of the windshield. Essentially I was standing up now to almost my human height.

The car was completely totaled. I was a long way into the wood. I could barely see the road form here and with the way this road winds and twists, no one would be watching the side of the road to see if a car had run off. It was lucky I wasn’t dead from the way it looked. The blood smell was from a pool I could see where the smashed driver’s side window was. I’d likely be dead if I hadn’t changed and the healing kicked in with it. Because of the change, the was shredded clothes everywhere.

My stomach growled and with it, I gave an involuntary growl. This sucked. Going through full moon on an empty stomach meant it was going to be much harder to control the urge to kill things. I hadn’t eaten since breakfast, which must be nearly 18 hours ago. Hopefully nothing living would show up and I could just sit tight until dawn. I hopped out of the wreckage and down to the ground.

Circling the car, there was nothing obvious to salvage. I nuzzled at the trunk and when it didn’t budge, I got my claws involved and managed to get it open. At least my duffle bag was okay so I’d have some clothes to wear when this was over. Hopefully I could find…

Two short barks behind me snapped that train of thought. I growled. The barks didn’t sound threatening, but at this point I didn’t want to take any chances. I’d been caught off guard by seemingly innocent animals before who thought they could get all alpha on my ass. I always won, but it was more trouble than it was worth. With me in a hungry state, I was already on edge. I nuzzled the truck closed to protect my clothes stash.

More barks behind me. I turned and found a female wolf. She was about half my size. Of course, even fully grown males were generally smaller than me. When you’re six foot five, you turn into a pretty big wolf. She bowed her head a bit and changed the tone and style of her barks. She must’ve thought I was a real wolf. This was bad. It’s like she’s flirting. I’d been warned about this years ago, but had never seen it. Female wolves were very drawn to male weres because of the extra pheromones. I can’t get laid in real life, but here, now in the middle of all this crap, suddenly I was desirable.

I growled and gave some of my best fierce barks. She stood her ground and bowed her head even more. I amped up the aggression more and got nowhere. This time she even stepped forward. I thought I sounded mean. Hell I’d scared of males before with this noise. What’s up with her? She needed to go. Based on where the moon was, there was easily four hours until dawn and I was not in the mood.

I gave my most aggressive pose and stared. She would look up, and then look away. It felt like some stupid Disney movie, the one where the dogs share the pasta. My stomach rumbled again. I felt the instinctual need to feed that. I could control a lot, hunger was something I was good at. I’d killed and eaten animals before. It was horrible for me the day after. She needed to go.

I charged at her while keeping up the barks. The noise alone should’ve scared anything within like mile. She cowered but didn’t move. Instead when I came to a stop in front of her and growled in her face she nuzzled me.

My stomach rumbled again, or more like had an earthquake.

She bolted. That scared her?

Maybe she knew she might become a late night snack.

With her gone, I went back to the car and laid down next to it. I just needed to hang tight for a few hours, change back, put on some clothes and get help. I got into my favorite wolf sleep position, slightly on my side, legs in close to me, head on the ground. It was cold but I’d make it. I just needed to be awake when I started to change back.

Something was coming. As I stood up the female returned. She carried a dead rabbit in her mouth, which she brought up and laid in front of me. Now it’s even more like that movie. My stomach kicked into overdrive though and I lunged for the food. There. Was. No. Controlling. It.

Within minutes the rabbit was nothing but carcass. I wasn’t full, but it was enough. And if I was lucky maybe most of it would be digested before I became a man again. I nodded my head in the direction of the female, trying to offer thanks. She gestured back to me in the same way before retreating to where she’d been before.

None of this made sense.

I dozed on an off through the cold morning. I kept waking up to images from the crash replying in my head. I was remembering more of it, including not being able to get myself out of the car before passing out.

I jerked awake one last time, but this time because I was being nuzzled by a cold nose. It was a cold nose against my freezing neck.

It was dawn. I jumped up, which scared the female wolf.

I was human. I couldn’t have been changed for more than a few minutes given how much light was in the sky.

Was she trying to wake me up? In my human form she should want to either bite me or flee.

I opened the damaged trunk, got the duffle bag and got dressed. She sat a few feet away and watched. I layered up shirts, even using ones that I’d worn on the trip, to be warmer since my coat had been shredded by my transformation.

I looked back at her. She looked content. I knelt down and put my hand out to her. She looked at me cautiously for a moment but ultimatley stepped towards me. Looking at her eyes, my mind flashed with memories again. She was the wolf I’d crashed to avoid. She nuzzled my hand when she got close enough, and I gently scratched the top of her head, between her ears. She’d taken care of me, even fed me last night. Remarkable.

She was startled as my cell phone rang from somewhere inside the car. She rapidly moved back as I climded on the car’s wreckage looking for the phone as it rang. Luckily I found it before it stopped. It was my roommate.

“Hey, man. You okay? You were supposed to be home last night. I just got up and it looks like you haven’t been here at all.”

“I crashed driving back. I’m in the woods somewhere.”

“Yeah, but I gotta get outta here. The car’s destroyed and I’m freezing. Let me see where I am, one sec while I look at GPS.” I was only about seventy five miles away. Glad I was closer than I thought. “So I’m just south of Hyde’s Bluff.”

“I’ll call in and let my boss know I’m gonna be late. Why don’t you call the cops to come to scene while I’m on my way.”

As I keyed off the phone the wolf gave a short howl. I looked over to her and she did another head bow before running into the woods. I guess she knew that more people were coming and it wasn’t safe for her.

I dialed nine-one-one to get connected to the cops in the local area happy to know that I’d soon be on the way home after a most surreal night.