The story to complete Flash Fiction #5 snuck up on me out of nowhere. Head over to the bottom of last week’s post to see what I did there.

We’re back with Storymatic this week. I drew one yellow card while Will added an orange and an additional yellow. 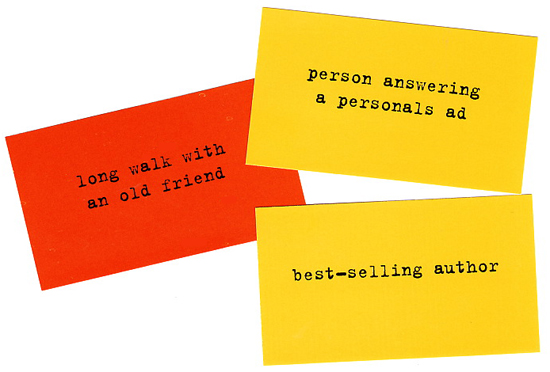 As always, feel free to join in on the FFF fun by writing a story and posting a link to it in the comments section. And, come on back next Friday to see what story I create from these cards.

“It’s good to see you, man,” Jared said as he walked along the wooded trail with Nick, or Nicky as Jared called him. They’d just started their walk, which was usually the first thing they did when they got together. “It’s been a long time since you’ve been home.”

“Yeah,” Nicky said, as they meandered slowly along. They’d walked down this trail hundreds of times through high school, when they were home from college and now, well into adulthood. “Mom made sure I know exactly how long. Six hundred thirty three days. I’m surprised she didn’t take it down to minutes and seconds.”

They both laughed. Ever since Nicky moved out for college, his mom’s been crazed about knowing when he was going to be home, and for how long. And, most of all, what couldn’t he be home and near his family more.

“Is she okay this is only for three days?” Jared asked, kicking a rock down the path.

“Not hardly. But I’ve got the rest of the book tour to do, so this is all the time I have. You’re coming tomorrow night, right?”

“Hell yeah,” Jared shot him a shocked look. “Why would you think I’d miss it?”

“My stuff isn’t exactly your kind of read. Wasn’t sure you’d actually want to hear it out loud.”

Nicky caught up to the rock that Jared had kicked, and kicked it backwards to Jared. They kicked it between them as they continued down the path. It was a cool fall day with a bright sun filled sky that sent rays of light through the tree branches that were still mostly full of brightly-colored leaves.

“It may not be what I read, but I’m still going to support my best friend. But, yeah, the sci-fi stuff’s never been for me. Now, if you were writing spy stories, James Bond or Jason Bourne or some other action-oriented character, I’d devour your books.”

Jared laughed. “I don’t think that’s possible. You’ve been writing hardcore sci-fi since we first met. I’m not sure you can change. Is it still all aliens versus other aliens sort of stuff?”

Nicky joined in the laughter. This conversation was a familiar one. They’d first had it in ninth grade. One semester in English class they had to do three stories. Of the twenty students, only Nicky interconnected his stories and made it about a colonization mission to another planet and the crazy, dangerous aliens the pioneers ran into.

“I’ll see if I can work in a spy angle sometime, just for you,” Nicky said,  as he missed intercepting the rock, which allowed it to sail off the path.

“Yes!” Jared raised his hands in victory. “Distract you with enough talk and you miss.” Jared picked out another rock and started the game over. “Are you excited to kick off the tour here?”

“Yeah. My parents did a New York launch a few years ago, and that was good and all. I’m sure they told plenty of stories to their friends. But to do it here, so all my friends and theirs can come is cool. I mean the publisher wasn’t completely thrilled to do it in a mom and pop bookstore in the middle of nowhere. But, they knew it was important to me to be able to launch one book at home.”

“Nice. I think most of the town is psyched about it. And you’ll probably sell some books too.”

“It’s not so much about that, not here. Don’t let my publisher know I said that.”

“Your secret is safe with me.” The walked quietly for a bit, kicking the rock along. “Any chance I could get you to help me write something?” Jared stopped walking as he spoke. He stopped while the rock was in his possession so that he didn’t lose it either.

Nicky stopped a couple steps ahead, caught off guard by the pause.

“Why would the journalist need the novelist’s help?”

“I’m trying to answer a personal ad. I can’t figure out what to write to capture me.” Jared’s face turned red and he turned away. “Sorry. I shouldn’t have brought it up.”

“Dude,” Nicky said quietly as he turned Jared back so they could look at each other. “It’s okay you’re answering a personal. And sure, I’d be happy to help you. You know that. It just threw me that you’d ask me for help since you write pretty damn well.”

“I could write a headline for it. Or I could write some news article about me. I’m not sure I can write something that really sells me to a girl. A girl who, at least in her ad, sounds pretty cool. She reads Ludlum and Child…and you. She likes hiking. She loves experimenting with  cooking. She lives just a stone’s throw from town. I don’t read personals, but I mis-clicked on the paper’s website the other night and there it was.”

“Or not. You know Logan and I met through a hookup site. This is a few steps up the classy scale from that. So what we should do is…”

Nicky drifted away in thought. Jared recognized that Nicky was rolling ideas over in his head.

“Do what?” Jared finally asked after several seconds passed.

“Electronic personals, right?” Nicky picked up, as if he’d not paused at all.

“Yeah. The paper’s very high tech despite being in the boonies.”

“Let’s craft a response together. You should invite her to tomorrow night. Maybe she’s already planning to come, so it wouldn’t be difficult for her to say yes. If she’s not, it’s a good invite to make since I’m on her author list. And you could dazzle her because you’re on the list for the reception after.”

“You won’t embarrass me, will you?”

“This isn’t college anymore,” Nicky said in answer. He knew where Jared’s concern came from. On a couple occasions they both sabotaged the other’s dates with some humiliating stories. It was all fun in games during school. Now that they were both in their early thirties, relationships were far more important and he was all for Jared finally finding the right person like he had with Logan. “I’ll be on my very best behavior.”

“You’re awesome,” Jared said, placing his arm around Nicky’s shoulder. “Any chance you’d consider coming back here and calling this place home? Then we could help out each other all the time.”

“I don’t know. There’s baggage here. And this place is so small.” The pair started walking again, leaving the rock behind as they were talking about serious things now. “But, the big city’s getting old. Logan and I both feel it Seeing trees out of my office window instead of buildings would be pretty awesome. I’ll be honest, I’m going to talk to Logan about moving some place like this while he’s here. See what his vibe is.”

“Your mom would completely freak, in a good way, if she thought you’d move back,” Jared said, sounding excited.

“Which is why you can’t say a word. Have dinner with Logan and I tonight. Mom reserved our last night for dinner at home and tomorrow’s gonna be a madhouse. We were gonna grab something simple, but it’s be great to have you join us. You could talk about the realities of living here.”

“Let’s get back to your place,” Nicky said, turning them back the way they’d came since they had to get back to Jared’s car. “We’ll whip up something that will snag you a date. Then we’ll go pickup Logan and get some dinner.”