There was a great video presentation that opened the panel featuring an array of figures, most of which showed exactly how far youth still need to come to feel safe and protected. Hopefully the video will get posted and I’ll update this post with it. Here are a few of the stats from the panel’s website.

Even with these disturbing statistics, the evening was not a downer. Instead, singer/songwriter Cyndi Lauper, the co-founder of True Colors Fund, started the evening off with a welcome that focused on the strength that a lot of these youth have. The strength was evident on the panel last night, which was a cross sex of race, sexuality and gender. 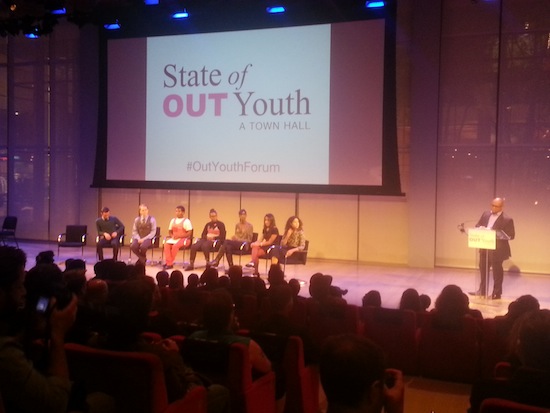 Here are a few things that stuck with me from the discussion:

I’m glad Jama–my friend, fellow Cycle for the Cause rider, and someone I got to know while I was a life coach for the Ali Forney Center–invited me to this. It was powerful hearing about these topics from the teens and young adults themselves rather than hearing/reading it second hand. Even though the LGBT community as a whole has made so many advances in the past few years, there is so much left to do to ensure equality and safety for all. And that is so important for the younger ones who are vulnerable if they don’t have proper support.

The panel gave me interesting food for thought for one of my possible Hat Trick sequels. In the story I’m thinking about, Simon has the opportunity to meet a array of LGTBQ teens. If I’m going to create these characters, I want to make sure they come across as real people–not caricatures or two dimensional, shallow characters. Hearing from these teens last night, will definitely help me as I continue to flesh out this story’s possibilities.