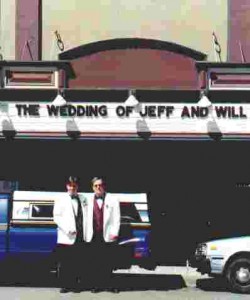 We were extremely blessed on Sunday, September 7, 1997. It was a beautiful day: no clouds, mild temperature. It was perfect. As we arrived at theatre, the cast of Godspell was tearing down their set and Bonnie and her crew were getting our items in place.

We were perfectly calm during the set up process and through the photos (we did photos ahead of the ceremony so afterwards we could go straight to the party). It was during the half-hour wait 1:30 and 2 that we got nervous. We sat up in the light booth watching everyone arrive and it hit us that there were a LOT of people at this thing. We were happy to see them of course, but it was nerve racking since they were all there to see us.

We must, once again, thank our supporting players who made our wedding day so special: our parents, officiant Clint Rebik, Best People David & Robin LaBounty (for Jeff) and Peggy Metzger and Chris Jioras (for Will), Soloists Stacey Bareilles and Sara Bareilles.

Here’s a look at our ceremony: 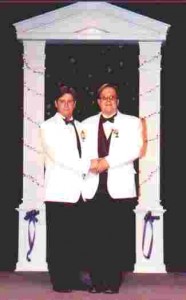 Prelude music:
“Total Eclipse of the Heart” – Bonnie Tyler
“Evergreen” – Barbra Streisand
Theme from “Laverne & Shirley”
“The Rose” – Bette Midler
“Chapel of Love” – Bette Midler
Theme from “The Facts of Life”
“Kiss from a Rose” – Seal
“Seasons of Love” – The Broadway Cast of Rent
Theme from “Wonder Woman”
“Do You Know Where You’re Going To” – Diana Ross
“The Way Old Friends Do” – The London Symphony and Pop Choir Processional:
“Bridal Dancing Queen” – from Muriel’s Wedding

Vows and the Exchange of Rings

Presentation of the Couple 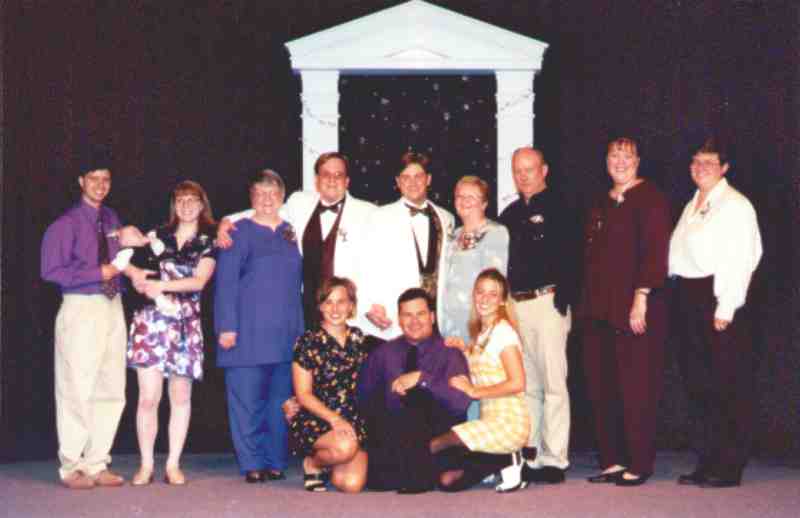