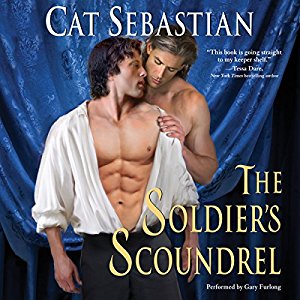 The Solider’s Scoundrel by Cat Sebastian has been on my radar for a while because of the amazing reviews it’s received. Will also recently read it and raved about it on Jeff & Will’s Big Gay Fiction Podcast so it was time for me to get on the bandwagon.

I don’t think I’ve ever read a historical romance in the true sense of the word. However, this read more like a mystery romance that just happens to be set in a long ago time.

Oliver is the solider who initially meets Jack, the scoundrel, to find out why his sister has paid Jack a large sum of money. Jack was hired to help Oliver’s sister get rid of her husband who was abusive. Olivier ends up finding out about a new case Jack is taking on and, because he’s smitten with the man, he goes along with Jack on the investigation.

It’s not easy for the two to fall in love. Certainly in the time they live, homosexuality is frowned upon by society. There’s also a class difference, which is what seems to be the most difficult for Jack to over come. The back and forth between the men on how to behave with each other, how to accept a kindness (and love) and if they can form a live was equal parts irritating and swoony. The sex they had was at first delightfully tentative and later scorching. Sebastain writes some of the best sex scenes I’ve read.

Meanwhile, since this was an audiobook, kudos to Gary Furlong for the narration. He distinguished all the voices wonderfully and played the romance to perfection.

I’m looking forward to listening to the The Lawrence Browne Affair once it’s on audio as well as this summer’s yet to be released The Ruin of a Rake.