Fiasco Theater’s “Into the Woods” 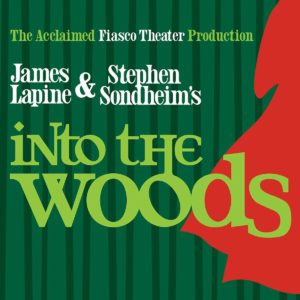 I’ve been eager to see Fiasco Theater’s production of Into the Woods since it’s stand at the Laura Pels Theater in NYC back in 2015. This stripped down production featuring only eleven actors (half the usual amount) who play all the instruments, is a powerful retelling of the well known tale.

This is the third stage production of Into the Woods I’ve seen, which includes an early 90s touring company as well as the 2002 Broadway revival. Of course, I’ve also seen the classic TV version of the original Broadway cast featuring Bernadette Peters as well as the more recent film. Among all these versions, Fiasco’s is among the best and comes so close to the magic of the televised Broadway performance. Fiasco has transformed Into the Woods–much the way Les Miserables was in 2014 or Spring Awakening was in 2015. It was like seeing it for the first time.

The nearly bare stage represents an attic-type space where the actors tell the story with whatever they can find. That’s an interesting and satisfying change from the stage spectacle of other versions. Plus the actors play the instruments and the acoustic, barebones presentation of the score is beautiful and really lets voices shine. 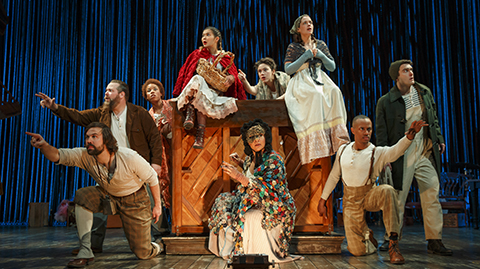 There are so many standouts in this cast. Darick Pead as Milky White/Florinda/Rapunzel’s Prince was a stand out as Milky White. His very animated portrayal was hysterical and he momentarily stopped the show with the cow’s death scene. Pead’s “Agnoy” duets with Anthony Chatmon II were vocally rich and wonderfully funny.

Evan Harrington’s Baker played a perfect emotional arc and his voice on songs like “No More” and “It Takes Two” were excellent. Patrick Mulryan as Jack was heartbreaking with “Giants in the Sky” and  in the moments leading up to the Giant’s slaying in act two. Lisa Helming Johanson in the dual roles of Little Red Riding Hood and Rapunzel was so funny and yet touching in both roles. Eleasha Gamble was delightful as the Baker’s Wife. Stephanie Umoh as the Witch filled some huge shoes since it’s so easy to think about Bernadette Peters in the role. Umoh was excellent, especially in the whirlwind as she leaves everyone behind after “Last Midnight.”

Woods always packs an emotional punch as it nears the end. Usually I’m reaching for tissues from “No One Is Alone” on to the end of the show. Here I needed the Kleenex much earlier in act two. There’s a darkness, stress and foreboding that’s played up unlike any version I’ve seen before. It’s effective and extremely powerful.

I’m so glad I caught this production on tour in L.A. I wish a cast recording was forthcoming, but I’m told that’s not happening. The show continues in L.A. through May 14 and then it plays Dallas, in the last tour stop, May 16-28. If you can, don’t miss this journey Into the Woods.