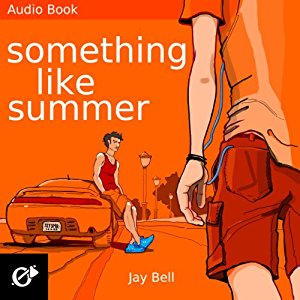 Jay Bell’s Something Like Summer has been on my TBR for a long time as more and more people recommended it to me. Now with a movie version on the festival circuit, it was high time to find out what captures people. I went the audiobook version, with a performance by Kevin R. Free.

I totally get why this is on so many people’s favorites list. Bell’s characters leap off the page and the three part story is an emotional roller coaster.

Out high schooler Ben has a thing for new classmate Tim. Over some weeks of Ben taking care of Tim after an accident, the two end up messing around. Ben wants a boyfriend. Tim’s afraid to admit he wants that and the whole thing is a mess. In the second part, Ben’s in college but still carries a flame for Tim even as he begin a new relationship with Jase. So much happens in the second part that is completely, wonderful sweet as well as utterly horrible. Then there’s the third part and a very difficult conclusion (I know the book’s been out for a few years but I’m not going to spoil for others).

I have to admit this was difficult to read at times. The choices some of the characters made totally pissed me off. It’s realistic though and Bell crafts the ups and downs perfectly. I’m going to pick up Something Like Winter soon because it’s the story from Tim’s point of view and it’ll be interesting to get the story from his POV.

I’m happy to add my voice to the many who recommend Something Like Summer.