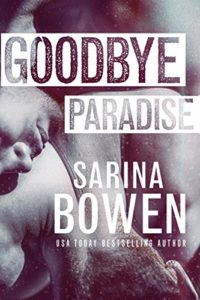 A Sarina Bowen book with no hockey? It’s true! And in typical Sarina Bowen fashion, the book is amazing and very difficult for me to put down.

Goodbye Paradise is actually a re-release of In Front of God and Everyone, which Bowen published in 2015 under the pen name of Nealy Wagner. She’s just put this out under her own name and I’m so glad since it let me find it.

The book centers on Josh and Caleb who spent their lives living in a religious compound in Wyoming. For twenty-year-old Caleb, he’s a sort of golden boy who gets the best jobs, is able to drive and his future looks good. Josh, Caleb’s best friend, is nineteen and viewed as weak and less desirable. Caleb knows Josh is about to get thrown out of the compound and he tells his friend where to go to wait for him. Caleb’s not getting thrown out, but he’s going to run to save Josh.

It’s rough to read portions of this book because the boys don’t have it easy. But that only makes their good times all the better. Watching Caleb and Josh figure out how to make their way in the real, non-cultish world is both difficult and adorable. Truly good stuff happens as they make themselves able to love each other. It’s easier for Caleb than Josh, but it’s beautiful watching Josh lose the shackles of his upbringing and make new bonds with Caleb. In true, Bowen style, she throws some stunning emotional curveballs. I was a mess during the last twenty-five percent of this book and it was tremendously satisfying coming out on the other side of it.

The next book in this series is, Hello Forever and I’m eager to get it. It’ll feature a new couple and it’s center but Caleb and Josh will be there too.