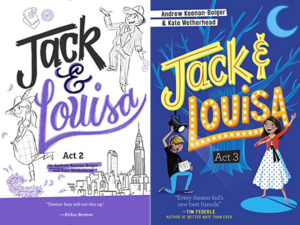 I read Jack & Louisa Act 1 back in 2015. When Act 2 came out it managed to fly under my radar. However, with the release of Act 3 at the end of January, I was able to catch up with these theater kids created by Andrew Keenan-Bolger and Kate Wetherhead.

Jack and Louisa are two middle school aged musical theater nerds who meet in Act 1 when Jack moves to Shaker Heights, Ohio after his Broadway career is derailed by his voice changing.

Act 2 picks up the story shortly after Act 1 ends. Jack and Louisa spend New Year’s in New York with Jack’s parents. They take in some shows, meet some of Jack’s friends and even go to the show Jack was fired from, which is a huge growing moment for Jack. Once they’re home and ready for the second half of seventh grade, it’s time for the spring musical (Guys & Dolls). Their new director, a former Broadway performer, puts Jack, Louisa and the G&D cast through a lot of drama.

In Act 3, it’s initially off to musical theater summer camp where Jack and Louisa make some new friends. For Jack, his friendship with Teddy is one he can’t quite figure out because it feels like it might be more than friendship. Once Jack & Louisa are back home, it’s the start of eighth grade and a decision about whether they should try out for the local production of The Sound of Music or enter into the Ghostlight Competition where they’d put together their own show. For Jack, it’s a hard choice. He knows Louisa wants to do Sound of Music, but he wants to go to Ghostlight because Teddy’s going to be there.

These books were wonderful. As a musical theater nerd myself, I love how packed these books are with references. Within a page, Act 3 referenced Michael John LaChiusa’s Giant (which I think is one of the most under-rated musicals I’ve ever seen) and Jonathan Larson’s pre-Rent musical Tick, Tick… BOOM! Beyond the references, Jack and Louisa continue to be such relatable characters, even for me some four decades older than they are.

Jack’s growth in Act 2 was amazing, especially for someone his age. He came face to face with the worst thing that had ever happened to him when he ended up going to see the musical he’d been fired from. He had the expected meltdown at having to do it, and even in the aftermath he wasn’t pleased with himself. Later, as he goes through the Guys & Dolls rehearsal he learns a lot of stuff about not underestimating people and about dealing with people who are intimidated by you. Yes, even a seventh grader can intimidate people. Louisa goes to great lengths too as she tries to defend and support her friend.

For Act 3, Jack and Louisa both get their first brush with love and it’s so sweet for both of them. I love how it’s handled with just the right touch. Especially perfect is how Louisa approaches Jack as she figures out what’s going on with him. The scene where they first really talk about who each might be attracted to is one of the most poignant of the series.

Jack’s shift from actor to director was also handled brilliantly. He learned so much in that experience, sometimes by doing things horribly wrong, that it makes me wish this book had been around when I was actually in middle school. It might’ve helped me navigate things better.

As with Act 1, the authors do a great job of hitting all the right beats with their young characters. The books are page turners and should be a must for anyone (kid or adult) who is into musical theater or wants to read some sweet, but very realistic, stories about growing up.