Book Review: “Painted on My Heart” by Kindle Alexander 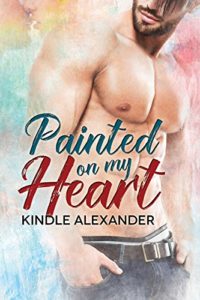 This is my first Kindle Alexander book (I know, weird). It’s probably not a surprise though that I loved it. Painted on My Heart is a delightful, yet pretty intense, story between a millionaire real estate developer and an artist.

Arik, the real estate developer, is also a bit of a playboy. He has guys around the globe, but he’s not looking to be tied down. That changes though when he meets Kellus, an artist whose work he’s admired for some time. For Arik, he’s not used to having his advances turned away. Kellus, however, doesn’t want a relationship because of the disaster his first love was–and continues to be.

Arik simply doesn’t take no for an answer, though, no matter how much Kellus pushes back. Kellus pushes back because, among other things, his life is dominated by his art and his drug addict ex who keeps turning up to cause trouble.

I love these characters. While Arik comes off as a controlling dick early in the book, his deepening desire for Kellus morphs him into solid boyfriend material. It’s pretty incredible the lengths that Arik will go to prove to Kellus that he’s worth of the millionaire (even when most guys would probably walk away because it’s too much trouble). And Kellus, the man needs all the love and hugs he can get. He’s got more baggage than anyone should have to hold. Sometimes I wanted to slap him for not allowing Arik to help him more, but it’s also what makes Kellus such a strong character because he wants to make everything right on his own.

There’s also a rich batch of supporting characters with Arik’s family, who are simply a hoot. I expected them to be more as if they came from Dynasty or Dallas, but in fact they’re more like a rich Modern Family.

Watching Arik and Kellus take one step forward and two steps (and sometimes more) back brought on all the feels. Kindle Alexander knows how to weave a romance with a ton of obstacles for the lovers to overcome. While this was my first Kindle book, it definitely won’t be the last because I want to see more characters fall in love through their words.