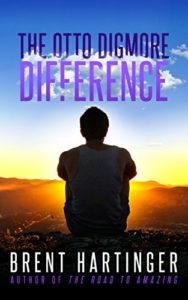 Otto Digmore is one of my favorite characters that was introduced in Brent Hartinger’s Russel Middlebrook Series. Otto was introduced when Russel went to camp in The Order of the Poison Oak. He was an interesting teenager to read about, especially back in 2005, not only was he gay but he was also living with scars on his face and body, which were the result of a fire when he was younger.

Like other characters form the YA series, Otto made the jump into Russel Middlebrook: The Futon Years, where we get to see everyone as college graduates in their mid-20s. Otto has now struck out with his own series of books with The Otto Digmore Difference being the first (coming out on February 21).

As with The Futon Years, I loved this book and it’s wonderful that Otto finally has the spotlight. This book picks up right after the events in The Road to Amazing. Otto returns to L.A., discovers his apartment door has been vandalized and that his CW sitcom has been cancelled. His agent isn’t being much help either, her assistant however thinks there’s a movie he needs to audition for.

The trick is that Otto needs to read for the director, who had to miss is audition in L.A. So, Otto, along with Russel, are on an adventure to get Otto to a meeting with the director before the movie is cast. This leads to a cross country road trip which is so fun. It’s just like a movie–which is perfect since Otto and Russel both love movies. Hartinger uses the typical movie plots to frame Otto’s story so well.

This book really digs deep on Otto–from his relationship with his scars and what they mean for his life to his feels on Russel, showbiz, his childhood and where he is in his life at age 26. Reading what motivates him was fascinating because he is the very different character in the Russel universe–which of course make the title of this book very appropriate. As you can expect with two characters thrown together for so many days, a lot of things come to light. Russel’s reactions to learning so much about his long time friend are, at times, intense. He learns things he likely never would’ve otherwise.

I’m eagerly looking forward to seeing where Otto goes from here. This book is an excellent introduction to Otto if you’ve never read any of the Russel books…and it’s even more perfect for those of us who’ve watched Otto in the background for so many years.

NOTE: I received a free, advanced, copy of this book in exchange for beta reading (as well as prep for an interview with Brent Hartinger for Jeff & Will’s Big Gay Fiction Podcast, episode 70).