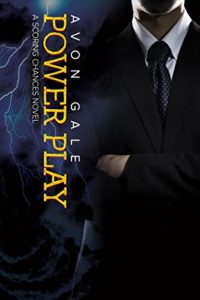 I didn’t think it was possible to love Avon Gale’s Scoring Chances series more than I already did–and then I read Power Play. This book leaves behind the Jacksonville Sea Storm, although the team along with Riley and Ethan do have cameos. This time the focus is on the Spartanburg Spitfires, the worst team in the ECHL. The GM is looking to stir up trouble by hiring former Boston Burin Misha Samarin as the head coach and former Montreal Canadiean Max Ashford. Years earlier, Max’s NHL career ended after an on-ice accident involving Misha. The Spitfires GM is hoping for a clash, but Misha and Max aren’t willing to play that game. They’re there to coach hockey.

What Misha and Max don’t expect is to fall for each other. Gale does a tremendous job with the couple’s courtship. Even though Max is quick to forgive Misha for the accident, Misha carries a lot of guilt that Max initially thinks is just because of Misha’s Russian upbringing. He soon learns there’s much more to it than that. As the two navigate their way towards being an open couple they go through a lot–because they both have some baggage they don’t necessarily want to talk about to anyone much less each other. In this book, even more than the previous two, then men come from difficult backgrounds and that makes it all the more compelling as they find their way to each other.

There’s also the matter of goalie Issac Drake, openly gay and headstrong. He’s got some baggage as well that he doesn’t want interfering with the Spitfires. His struggles create a strong supporting storyline that is excellent–and one I’m not going to give away in any fashion.

I feel like I’ve watched an already strong writer grow in her storytelling techniques through these three books so far. Well done, Avon Gale!

Between a superb romance and the mystery surrounding Issac, and a great dose of hockey action. Power Play was a great read to close out 2016. Issac takes center stage in Empty Net, so that’s going to be one of my first books of 2017 to read for sure.