Book Review: “Save of the Game” by Avon Gale 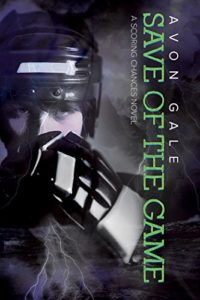 I’m so happy I moved in to Save of the Game by Avon Gale so soon after I finished Breakaway. This book picks up shortly after Breakaway as a new season gets underway for the Jacksonville Sea Storm. This time out goalie Riley Hunter and defenseman Ethan Kennedy take center stage after having been supporting characters in the Breakaway.

Beyond the relationship Riley and Ethan form, there’s a great story of family here as well. Ethan comes from a very supportive family while Riley’s from a wealthy but distant family. It’s a study of contrasts as Ethan can’t understand Riley’s family situation while at the same time Riley is practically adopted by Ethan’s family with hardly any questions at all.

Of course there’s hockey in the book too and it’s woven into the story beautifully. I especially liked Ethan having to make decisions about where his career should go once the season is over.

As with Breakaway, I loved everything about this book–the romance, the hockey, the stories that were tangent to the romance. Avon Gale has a great thing going with this series and I look forward to facing off with book three soon.