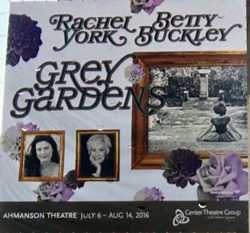 I first saw Grey Gardens on Broadway in December 2006 and enjoyed it, especially the powerhouse performance from Christine Ebersole (you can see that review as part of this post). This week I got to see the musical with Rachel York and Betty Buckley as they re-created a performance they gave in 2015 at Bay Street Theater.

The show was once again stunning and these two actress gave sublime performances. 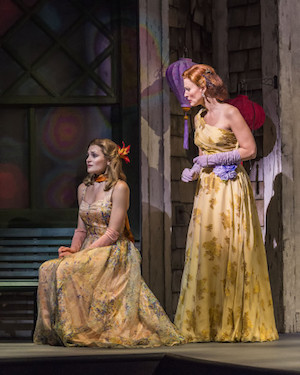 This musical expands on the 1970s Grey Gardens documentary that shed light on the eccentric, difficult, and often sad life of the Beale women who lived in squalor in the dilapidated Hamptons mansion known as Grey Gardens. Thirty years previously, the Beales were part of high society and act one of the musical shows the family preparing for a party. Act One shows Edith (at right is Rachel York, standing, as Edith) arranging the engagement party to celebrate “Little” Edie and Joseph Patrick Kennedy Jr. However, it’s thanks to Edith that the engagement is called off and Little Edie runs away. Act Two, shows the women together, trapped in a co-dependent  relationship and living in the rundown house that the local health department has declared unfit for occupancy.

York had the challenging dual role of Edith Bouvier Beale in the first act and switching to play “Little” Edie Beale in the second act. The transformation was just as amazing for York as it was for Ebersole. To go from domineering mother to slightly manic, depressed, angry, vulnerable daughter is quite the switch up and York does it flawlessly, right down to differences in her voice (especially her singing voice). It’s an impressive star turn.

It was a treat to see Betty Buckley on stage again. The last time I saw her was in the mid-90s when she played Norma Desmond on Broadway in Sunset Blvd. She was excellent as the older Edith who still knew exactly how to manipulate her daughter. She was in fine voice and humor too.

York and Buckley even managed to get through a prop failure. At the start of the second act, as Edith is calling out a window to her daughter, a curtain rod came loose and dropped on to Buckley’s head. The actresses shared a brief look and then played as if that were supposed to happen by blaming the racoon that was loose in the house. It was a well played, unplanned moment. 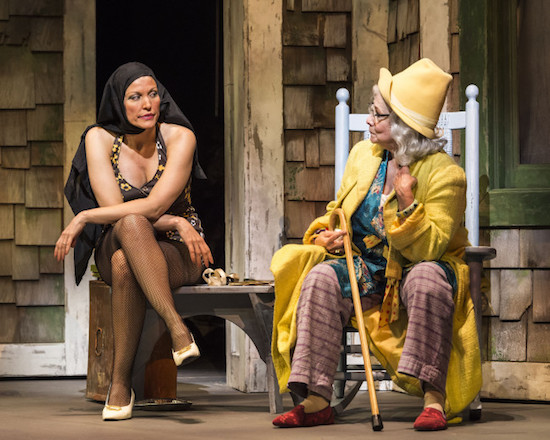 The production overall was quite good. Two things, however were a distraction. The second act takes place as the documentary crew is filming and those filmmakers are on stage occasionally. When they are, very often, the scene is projected somewhere on stage  as it plays out (as shown in the picture below). The was unnecessary and caused my eyes to wander between the live action and the projections. There three holes in the stage for the orchestra pit. The audience never sees the orchestra, even the conductor is not visible. The actors must spend the play going around, behind and in front of the holes which caused unnatural movements–again another distraction for the audience. Luckily the fine performances more than made up for it. 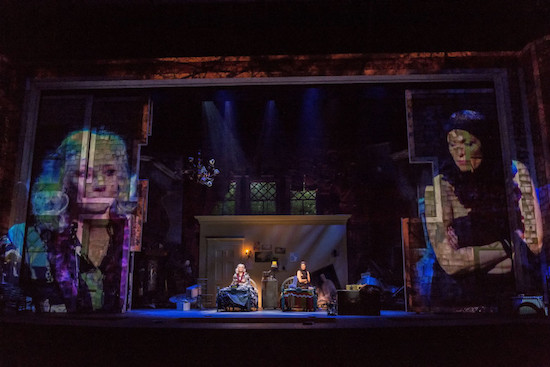 A few other notables in the case. Bryan Batt, who played Edith’s pianist in the first act was great. It was wonderful to see him on stage again as well. I also enjoyed seeing Josh Young on stage for the first time. He’d been in a couple shows that I didn’t catch on Broadway even though I was tempted because of his strong voice. Here he played both Joe Kennedy in the first act and then Jerry (a young man who did odd jobs at Grey Gardens) in the second.

It was a lovely, and, as usual, a little sad, to spend the evening at Grey Gardens and I’m very glad I did.