Book Review: “The Orchard of Flesh” by Christian Baines 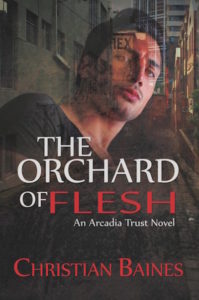 I don’t read much paranormal/urban fantasy, but something about the blurb for Christian Baines’ The Orchard of Flesh compelled me to give it a go. This is the second book in his Arcadia Trust books and to start off he’s done a great job of making this one able to be enjoyed without reading the first (even though I plan to go back to that one since I loved this one).

Reylan is a Blood Shade–that’s the term the vampires prefer to use in this world–ends up investigating a case involving disappearances of Blood Shade servants as well as other humans and supernaturals. It’s not something he wants to do because enough problems happened when he last worked for the Arcadia Trust. Except he has to because his friends, and his werewolf lover, are in danger.

This reminded me of True Blood the TV series at its best in its first couple seasons on HBO as well as the Blood Ties books from Tanya Huff. In particular Reylan is a great character and it was impossible not to root for him. The man just wants to live his life, but he gets pulled into some really crazy stuff. Happily, the world Baines created isn’t hard to follow and even the tweaks he’s made so the paranormal creatures are his own don’t stray them too far from what I consider to be their typical origins. For example, no one sparkles but for these beings they’ve inherited their supernaturalness rather than been turned.

The specific plot of Orchard of Flesh is something I don’t want to go into. The twists and turns and Reylan slowly discovers what happening, including how he gets together with werewolf Jorgas, are far too fun too spoil. Baines cleverly peels back the layers of the baddie that’s lurking and he brings the reader to the end in an extremely satisfying way. Not only am I going to go back and read book one, but I’m eagerly awaiting book three.