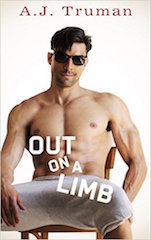 In the aftermath of reading this book I’m completely in a squishy, romantic mood (and that’s a good thing in case you were not sure). Out on a Limb, the second book in A.J. Truman’s Browerton University Series, grabbed me early and wouldn’t let me go until the beyond satisfying ending.

This is one of the best May/December romances I’ve read. Cameron is a 22-year-old who is just months away from graduating from Browerton and then he’s off to Hollywood to live his dream as a screenwriter. When he meets Walker, 15 years his senior, Cameron is thrown off his game as someone who isn’t looking to make any lasting attachments since L.A. is where he sees his life. Walker’s a divorced father whose wedding to his college sweetheart ended when he found out Doug was cheating on him. His life is consumed by work, even as he dreams of spending more time with his six year old son and pursuing his own dreams.

Cameron and Walker have such a pull on each other, and yet they feel they shouldn’t be together for any number of reasons. Yet, as they keep seeing each other and Hobie, Walker’s son, starts to like Cameron (Hobie and Cameron have some epic times with Legos), it gets harder for the two to pull themselves a part. Truman builds this back and forth perfectly throughout the book giving us great character growth as both men examine what they want out of life–and if that life includes the other.

My only annoyance is that I couldn’t read this faster–it was difficult to put down every time I had to stop. I’m definitely going back to read book one of Browerton because I want to read more of Truman’s stories (just to note, this book does stand alone just fine). I look forward to seeing what comes next from him, too.