“The Wiz” and a trip to Ashland 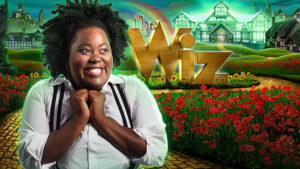 We got away for my birthday weekend to go up to Ashland, OR, and a visit to the Oregon Shakespeare Festival, which is presenting The Wiz this summer at the Allen Elizabethan Theatre.

This first fully staged version of the show I’ve seen. Back in 2009, we saw a City Center concert presentation of the show. Of course, we saw NBC’s spectacular live broadcast in December 2015, and the movie version is in our Blu-Ray collection. OSF’s staging was outstanding in every way and made even more magical by its use of the outdoor Elizabethan theatre. Director Robert O’Hara embraced the setting and made Oz Elizabethan, which connects back to Dorothy living in modern day Kansas studying Shakespeare in her high school English class.

Ashley D. Kelley was terrific as Dorothy, with just the right amount of wonder, sass and fearlessness. Her voice was just right on the classic song “Home,” as well as in the first act’s somber “Soon as I Get Home.” All of Dorothy’s friends were spot-on. J. Cameron Barnett’s Scarecrow channeled just a touch of Michael Jackson (including a sequined glove on one hand) and it was perfect. Christiana Clark was a treat as the queen of the jungle. I very much enjoyed her take on the lion. Rodney Gardiner, however, was my favorite of the trio, his steampunk-like Tinman was incredible, especially his “Slide Some Oil to Me.”

Byron Easley’s choreography was great. The Tornado Ballet is always a favorite and the storm clouds moving Dorothy around the stage was a clever way to show the transition to Oz. The moving yellow brick road during “Ease on Down the Road” was fun. In particular I loved the citizens of Oz in the Emerald City Ballet, which was reminiscent (at least to me) of Madonna’s “Vogue” performance from the MTV Video Music Awards.

I loved this show, and my first time at OSF. I suspect we’ll be headed back for future shows. Below is a look at The Wiz which runs select nights through October 15

Beyond the show, I enjoyed Ashland. The downtown areas was full of cute shops, including several bookstores, and galleries. The food was excellent–among the best meals were breakfast at Morning Glory cafe and a scrumptious Italian pre-show dinner at Pie + Vine. I look forward to a return trip to Ashland in the future to explore some more.