Book Review: “The Second Half: A Gay American Football Story” by Scott Pomfret 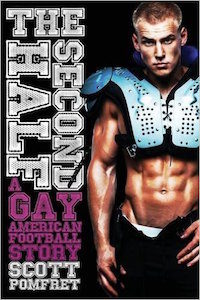 It’s been way too long since I’ve read something from Scott Pomfret, and this is the first time I’ve read him as a solo author (he’s also one half of Scott & Scott). The Second Half: A Gay American Football Story is a wonderfully compelling romance between two athletes. And, of course, athletes are among my favorite character types to read–and write.

College football coach Peyton Stone has a crush on his starting QB Brady Winter. Peyton’s also in the closet because his head coach is a homophobe. Brady sees through the screen though and after many attempts he finally gets Peyton to acknowledge there might be something between them. The courtship between these two is fantastic–Peyton is constantly worried something’s going to get them in trouble and Brady keeps pushing his boundaries.

This isn’t a May/December romance either. Brady is older than the usual college kid because he deferred college to fight in Iraq for a couple years. Peyton, meanwhile, is among the youngest coaches in the Midwestern conference.

Of course, their budding romance does get found out and all hell breaks loose for them both. This is where the book really gets good as Peyton and Brady work to get back to each other as well as fix the damage that’s been done. They are helped, and in some cases hindered, by an excellent supporting cast that includes Peyton’s mom, Brady’s dad, a trainer at the college and some of Brady’s teammates.

The core of the book though is Peyton and Brady and the push/pull they have with each other. Peyton also has a lot of baggage to work through, mostly because of his mother. As great as the romance is between Peyton and Brady, watching Peyton go around-and-around with his mother was fascinating especially as she tries, often futilely, to get her son to do what she wants.

This satisfied my love of athlete romance completely. I know Pomfret has a couple other new books out this year as well so I’m going to pick those up as well because I enjoyed getting back into his storytelling.