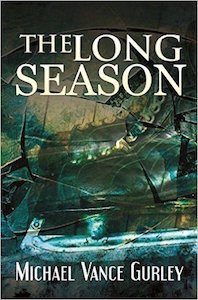 It’s well known I love a book about hockey players in love–I read them and I write them. Michael Vance Gurley’s debut novel The Long Season is superb addition to my shelf of hockey romance.

The story focuses on 18-year-old Brett Bennet who is drafted by the upstart Chicago Blackhawks. Brett travels from rural Wisconsin to the big city, alongside his best friend Mickey, for a season no one could’ve predicted. You might have seen that word “upstart” in relation to the Blackhawks and that’s because the novel is set in 1926/27 as the team was formed. Of course, that’s also in the middle of the roaring twenties, prohibition and when being gay had you deep in the closet.

Brett’s gay and it doesn’t take him long to develop a crush on 25-year-old Blackhawks goalie Jean-Paul Moreau. What he soon finds out is that Jean-Paul is also gay and just might have feelings for Brett too. Unfortunately, it’s not an easy love to admit or hold on to because of all the anti-gay sentiment of the era. That’s all too obvious in a couple things the characters say and think.

Jean-Paul to Brett: “That glimers of normalcy are not the same as normalcy. If you can’t accept this, it’s because… you are so young. Give it a few more years. You’ll see. Take a shower. I have to go.”

Brett’s thoughts as he tries to explain to an ally how he feels: “She could not fathom the breath catching and bloodcurdling fear of being found out. I was a walking, ticking time bomb trying to live my life.”

Gurley’s done an incredible job mixing the romance of Brett and Jean-Paul trying to make something work against all odds — and part of the odds is Jean-Paul who at 25 has already accepted that he’s not supposed to have love — with old-time hockey and the roaring twenties. It was a treat reading what the gay scene in Chicago (and there was a scene) was like back then. Plus a huge dose of hockey–from the extremely rough ways the sport was played to how difficult it could be to travel from place to place. There are so many wonderful nuances to this story, going far beyond the Brett/Jean-Paul romance.

It gives me pause to think too about other fictional hockey players. Simon in my Hat Trick series starts out at 18 just like Brett does and even though they’re separated by some 90 years, they share some of the same concerns. The same can be said about the Graham and Rikker in Sarina Bowen’s Understatement of the Year and Wes and Jamie in Bowen and Elle Kennedy’s Him and Us. So much has changed, and yet so much stays the same. Of course, it’s a truth lived in reality too by hockey players (and any pro sport athlete really) who think about coming out. There are too few roles models in 2017 that it’s can still be a scary thing.

If you like my Hat Trick series, Sarina’s hockey books or any romance involving athletes, pick up The Long Season and check out the journey Brett and Jean-Paul travel. Gurley’s crafted a thoughtful, profound look at young love during the jazz era and the birth of modern hockey.