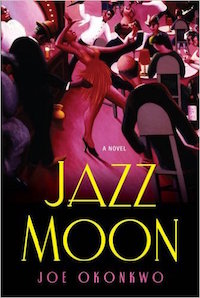 Jazz Moon, the debut novel from Joe Okonkwo, is unlike anything I’ve read recently and I absolutely loved it for taking me to another time and place. The book reminds me of E.L. Doctorow’s Ragtime in how it transports to the early 20th century. And, no doubt because I’ve just seen it, I was also thinking a lot about Broadway’s Shuffle Along because it too captures this era.

Jazz Moon is the story of poet Ben Charles, a young man who stole away to New York City at the age of fourteen with a young bride–although theirs is a marriage of convince as they are both running away from their pasts. As the book opens in 1925 Ben and Angeline have been in the city for several years and are getting by. Their world is rocked one night when they’re in a club and meet trumpeter Baby Back Johnston. Baby Back flirts with Ben and it brings up feelings Ben’s been trying to keep suppressed for years.

Baby Back works his charms on Ben and eventually they make the move from Harlem to Paris where Baby Back plans to take the world by storm. As Baby Back works towards stardom, his relationship with Ben starts to buckle under the stress. The result is Ben discovering Paris on his own and truly being able to build is own life for the first time.

Okonkwo created such a complex, compelling character with Ben. This young man had a difficult childhood, a decent life he gives up to take a chance on a life where he can be more himself and ultimately ends up in a place he hadn’t planned on (at least that’s my interpretation). At the same time, all the settings become characters of their own. Ben’s childhood (which we get through stories he tells) is very different from Harlem which is different than the sailing to Paris which is different from Paris. Each place adds to the story, and makes Ben evolve his personality.

Okonkwo’s writing has a rhythm that serves this piece well. I have to reflect back on another stage show. Michael John LaChisua’s The Wild Party (based on 1928 poem of the same name by  Joseph Moncure March) featured a jazzy underscore that helped invoke the mood of the musical’s book scenes. As I was reading, I heard an underscore in my head as the words went by. It was perfect and it may not happen for everyone, but I enjoyed the music the words set off in my head.

This was a challenging read, too. Reading how race relations were in the 1920s wasn’t easy (and was in some cases to reminiscent about how it still is sometimes). I can’t imagine the amount of research Okonkwo had to do to create the world of nearly 100 years ago, but from my point of view he’s done a great job of giving a history lesson alongside a compelling fictional tale.

I’m so glad Jazz Moon was put on my radar because it’s something I don’t think I would’ve discovered on my own. Truly a great read and I can’t wait to see what Okonkwo does next.