Three Show Roundup: “Tuck Everlasting,” “She Loves Me” and “Disaster”

We wrapped up our New York trip with shows each night of the weekend. 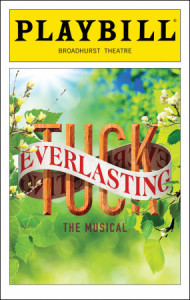 I know I saw the film version of Tuck Everlasting when it came out back in 2002, but I didn’t remember much about it. What sold me on seeing the new musical is that it stars Carolee Carmello and Andrew Keenan-Bolger. The show is delightful and reminds me of The Secret Garden musical from 1991.

The story follows young Winnie when she runs away from home and meets up with the immortal Tuck family. She’s afraid of death since her father passed away nearly a year ago, and she’s tempted by their “17′ year old son, Jesse, (who’s actually around 102) to join him in a few years by drinking from the fountain of youth. The rest of the family, meanwhile, works to convince Winnie that allowing the circle of life is more important. Meanwhile, there’s an evil guy running around who wants the fountain for himself.

The musical is sweet and perfectly family friendly. I love the folksy sound of the music by Chris Miller, and the book by Claudia Shear and Tim Federle balances between warm, funny, sad and tragic nicely. I loved the choreography from  Casey Nicholaw (who also directs), andin particular what he did showing how time passes was great. The Tuck family, with Carmello as mom, Keenan-Bolger as Jesse, Robert Lenzi as Miles and Michael Park as Dad are all perfect. You get their weariness and being over 100 years old (it’s not something they were looking for) as well as their desire to still find wonder in the world. Sarah Charles Lewis in her Broadway debut as Winnie definitely reminds of young Daisy Eagen in The Secret Garden.

The show is absolutely sweet and magical but I wonder how the NYC audiences will take to it since its not edgy and has no big special effects. Hopefully it does finds it’s audience because those who take the chance on it will be happy they did.

This show is in previews through April 25 and then going into an open-ended run. 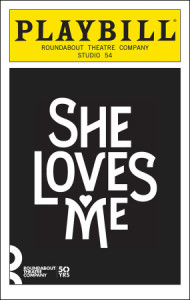 It was a lovely trip back to 1963 with the classic Bock & Harnick musical She Loves Me. A stellar cast featuring Jane Krakowski, Zachary Levi and Gavin Creel (Laura Benanti  was unfortunately out sick, but her understudy was solid) were wonderful in this romantic comedy that follows a similar plot to the films The Shop Around the Corner and You’ve Got Mail.

Here, Georg (Levi) and Amalia (played at our performance by Laura Shoop) are writing love letters to each other, but don’t realize it because it’s through a lonely hearts/dating service in 1934 Budapest. As they start working together in a Parfumerie, the end up disliking while as the same time circumstances keep them from meeting.

The music here was classic 1960s musical theater and it was lushly romantic. The entire cast is top notch, playing their roles perfectly. This was a perfect escape, and a great example of a classic musical done in a classic fashion.

She Loves Me is playing is a limited engagement through June 12 and if your into romance it is a must see. 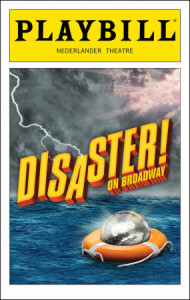 We wrapped up the trip with the ridiculously hysterical Disaster. Combining favorite things: 70s disaster films and disco music this show takes place on a huge floating casino that ends up in an earthquake, tidal wave disaster and it’s all set to classic disco music. It’s just as kooky as it sounds and it works so well because the cast takes everything seriously (think musical version of Poseidon Adventure with a disco score).

We spend the first act getting to know the characters, in typical disaster film style, and the second act is everyone trying to get rescued. The music selections are an awesome cross section of 70s hits: “Theme from Mahogany,” “Hot Stuff,” “Without You” (earnestly sung by Adam Pascal when he finds his ex on the boat–it was one of my favorite moments), “You’re My Best Friend” (which was sung for someone’s death scene), “25 or 6 to 4” and the list goes on.

I laughed from start to finish in this show that’s pure, fun entertainment. It’s a limited engagement through July 3 and if you want to sit back and have a good laugh, check out this show.