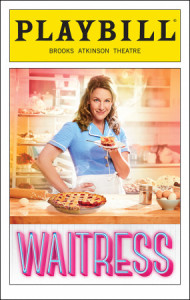 I had my second helping of Waitress pie last night. I fell in love with the show in Boston last September (you can read the review of that here) and am bowled over that the show is even better now.

It’s been about six months since I first saw the show, but of the changes I noticed there’s a bit more time in Jenna’s head now as she gets her frustrations out by creating pies. There’s also a bit more time spent in how awful her husband is to her. There’s more choreography/movement now too, and I love what that brought to the show.

Particularly outstanding is how much Jessie Muller’s grown in the role of Jenna. She was incredible in Boston, but now there’s even more depth in the character. “She Used to Be Mine” has always been the emotional height of the show, but last night Muller delivered even more punch (and made me wish I’d remember tissues because I knew what to expect with that song).

A couple other tweaks I noticed: “Door Number Three” is gone and while I liked the song I can’t say that it’s all that missed either. Also, at the end, there was a scene with Jenna and her daughter LuLu making pies. That quiet moment is gone and that I do miss. I can’t recall if that moment was the show’s exact ending point in Boston because I know the diner was rebranded as LuLu’s too, but that last pie making moment was poignant. I know the show is still in previews for another few weeks, so they’re likely trying things out still.

Regardless of what becomes of that mother/daughter moment, the show continues to be outstanding (and as I mentioned, even subtly better than when I saw it last). Everything in the show works great from Jenna’s relationship with her friends Dawn and Becky to the quirky, funny times she spends with her doctor. I suspect the show is about to settle in for a long, successful run because audiences should eat up the story of the waitress who doesn’t want to just be “happy enough.”