Broadway Double Feature: “The King and I” and “Shuffle Along”

The first day of theatre week 2016 got off to a great start yesterday. It was Wednesday, so we were able to see two shows. 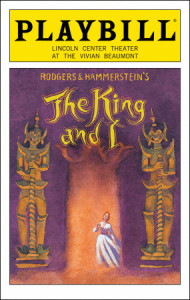 I’m glad we made it to The King and I before Kelli O’Hara and Ken Wantanbe depart the production later this month. I have to admit that I’ve never seen King on stage or screen, so I didn’t know the complete story. In fact, there are favorite songs that I didn’t realize came from this show (such as “Hello Young Lovers” and “We Kiss in a Shadow”). Given this, I was unprepared for the emotional roller coaster to come.

The plot I knew the most about was, of course, Anna coming to Siam to teach the King’s children and his wives, and, in the process, transforming the King and kingdom. I loved Kelli’s Anna from the moment she arrive by boat. Her interaction with Ken’s King, trying to get him to understand how to treat his people and women was forceful, and yet touching. Ken’s King was fierce and funny and so touching as he evolved through the show. Potential spoiler here, I was unprepared for the King to die at the end and that ripped my heart out since he was just learning how he should be. Luckily his son learned, and that was beautiful.

The plot I didn’t know was between young lovers Lun Tha and Tuptim. Such a heartbreaker, and yet ultimately the turning point for the King and Anna too. Conrad Ricamora and Ashely Park were stunning as the doomed lovers. Their voices soared in their songs, especially “I Have Dreamed.” I hope to see and hear more from these actors because they were amazing. Also to note is Ruthie Ann Miles as Lady Thiang, or as she was introduced at one point–the Head Wife, she’s so protective of the King, even while she could be jealous over the relationship forming between him and Anna. Her “Something Wonderful” at the end of Act I was sublime.

In the many shows I’ve seen at the Beaumont, with the exception of War Horse, I’ve never seen the space used as well as King and I did. From the moment the ship brining Anna sails on to the stage and on through the pageantry of the play in act two and ultimately the King’s chambers at the end of the show, it was all stunning. 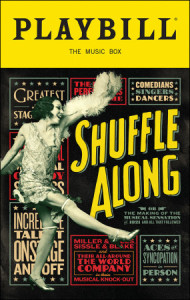 Shuffle Along or the Making of the Musical Sensation of 1921 and All That Followed (or just Shuffle Along as it’s mostly known) is an new musical with a stunning cast that exceeded all of my very high expectations for it.

Shuffle Along is, in fact, a musical sensation of 1921, and is considered to be the first Broadway musical (which included love songs) written, directed, produced and starring African Americans. It featured a book by F.E. Miller and Aubrey Lyles with music and lyrics by Noble Sissle and Eubie Blake.

This new musical, is exactly what the title says. Act one tells the story Shuffle Along’s creation and arrival on Broadway in May 1921. The second act follows the creators and stars in the years that followed, which were tumultuous as partnerships and loves dissolved and Shuffle Along was eclipsed, and eventually disparaged despite what it accomplished.

There’s a top notch production team here. George C. Wolfe wrote the book and directs using the elements of the original Miller/Lyles book as well as the original Sissle/Blake music. Savion Glover (who we saw in the audience — which wasn’t surprising since the show is still in previews and being tweaked) choreographs. Audra McDonald, Brian Stokes Mitchell, Billy Porter, Brandon Victor Dixon and Joshua Henry lead the incredible cast.

The show is an electric shot that’s unlike anything I’ve ever seen. Glover’s tap dancing, which permeates the show, is nothing short of stupendous–the movement and the percussion was phenomenal. (Side note: the Tony for choreography this year is going to be a tough one between Glover’s sensational work here and Spencer Liff’s haunting work in the Spring Awakening revival.) Mitchell and Porter as Miller and Lyles along with Henry and Dixon as Sissle and Blake were perfect. Each partnership has it’s own dynamic and chemistry while the four together also had their own style of interaction. Each of the actors had a moment to shine. McDonald as star Lottie Gee was simply heartbreaking as she gave up so much for success and love.

Everything about this show is amazing, but there are some callouts to be made. First, the dancing. I love good dancing and this show has it from start to finish. There are also three song moments to mention. Unfortunately the Playbill didn’t list out the songs (I think that’s because the show is in previews and the lineup is being adjusted) so I can’t name them but I’ll give credit as best I can. In act one, when the company is trying to get to Trenton, Mitchell has a song that starts as a capella, builds to add some percussion with tapping and suitcases and eventually adds the rest of the company. This was breathtaking.

In act two, when Miller and Lyles are breaking up their partnership, Porter belts a blusy song that puts all of his anguish over the past few years out. It lays him bare. For me, this rivals any moment Porter had as Lola in Kinky Boots, and he had quite a few turns of emotional impact there. Also, in act two, McDonald lays her pain out over never winning Blake away from his wife and having the life she wanted. I hope these songs all survive the final cut as the creative team works towards finalizing the show for its opening on April 28.

I’m glad we caught this show because it’s completely different and completely incredible. I suspect as word gets out of how amazing it is, tickets will get harder and harder to get (it looked at, or very near, sold out last night).

With the show still early in previews, there are no videos or stills from the show. Keep an eye out though as this gets closer to opening because, trust me, you need to see what happens on stage at Shuffle Along.  The picture below is the intermission curtain, which I shot. Notice those top dollar tickets are just $2.50! 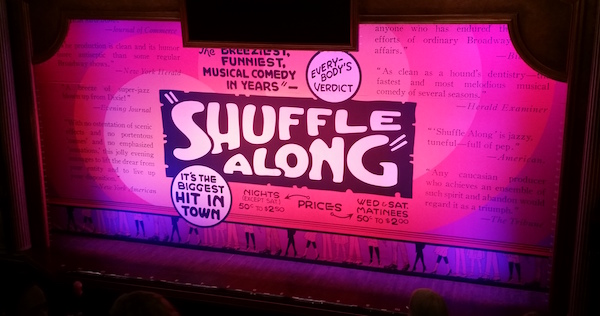