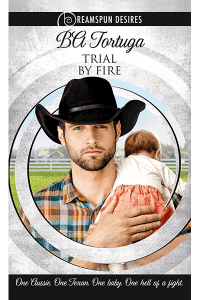 BA Tortuga’s Trial by Fire was a great read thanks to the terrific characters of Lachlan McCoughney and Holden Sheffield. They’re both tough, well-off ranching guys, with distinct soft spots for family, and eventually for each other.

Aussie Lachlan rushes to Texas when he gets word that his sister, Addie, who he hasn’t seen in years, was killed in an accident. He finds out he’s also an uncle because Addie and her husband left behind a baby girl, Chloe. In Texas, Lachlan finds out the baby is under the care of Holden, Addie’s brother-in-law. Holden’s twin brother died with Addie.

The two men initially scuffle. Holden knows Addie ran away from her family and she spoke little of them. The Sheffield’s are none to thrilled when Lachlan shows up, especially with designs on taking Chloe back to Australia. However, as they get to know Lachlan the family, and Holden in particular, warm up to him.

The slow progression of Lachlan and Holden from hate to lust to love was everything I love about romance. It was paced beautifully and BA wrote these guys so perfectly that I felt like I was invested in trying to help two friends work out their issues. I also liked that the major conflict in the story essentially helped draw the guys together more instead of serving to temporarily break them apart. And, adding in their mutual love for their niece just made it all the more heartwarming. Finally, the addition of the prologue was the perfect bow on the story.